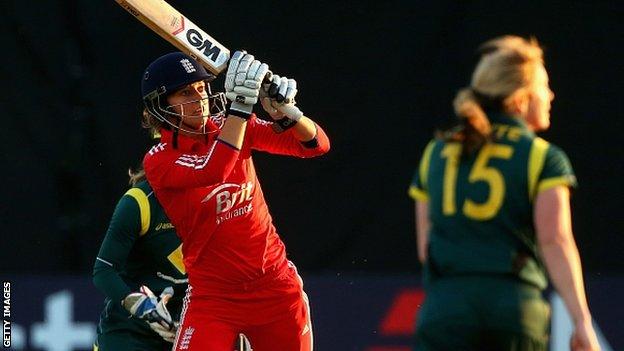 England moved within one win of regaining the Women's Ashes as Sarah Taylor inspired a 15-run victory over Australia in the first Twenty20 match.

Taylor cracked 77 off 58 balls, England's highest individual T20 score, as they racked up 146-4 at Chelmsford.

Australia never recovered from losing two wickets in the first three overs as they struggled to 131-5.

England, 8-4 up on points in the multi-format series, will claim the urn if they win either of the final two T20s.

"We were fantastic with the bat and Sarah Taylor played another fantastic innings which got us to a good total," said England captain Charlotte Edwards.

"In Twenty20 you need someone to get 70s and 80s and Sarah was the difference between the two teams today. She showed she's a world-class player."

The next match is on Thursday in Southampton, followed by the series finale at Chester-le-Street on Saturday - both double-headers with the men's sides.

"We're going to go down to Hampshire and fight really hard," said Taylor. "We don't want to have to go to the last game, so we'll put on another show."

England, who won the last two one-day internationals to fight back from 4-2 down in the series, made a fast start in front of a healthy Chelmsford crowd as Edwards cracked four fours in the first two overs before chipping to midwicket for 17.

Heather Knight, whose 69 helped England win Sunday's third-one-dayer in Hove, was then brilliantly caught by Jess Cameron for 13.

Dani Wyatt was run out by Rachael Haynes for 28 to break a partnership of 88 with Taylor that spanned 12.2 overs.

Taylor, who struck six fours, surpassed her previous T20 best of 73 in the last over before she was bowled by Erin Osborne off the last ball of the innings.

In Australia's reply, Meg Lanning was brilliantly run out by a direct hit from Arran Brindle and Alyssa Healy was caught behind off Katherine Brunt.

Jenny Gunn then removed top-scorer Jess Cameron for 36 and captain Jodie Fields for six to all but secure the victory before Wyatt accounted for Alex Blackwell.

Haynes (25) and Elysse Perry (30) added an unbroken 55 for the sixth wicket, but the damage had already been done.

"England got off to a flying start with the bat and it was hard to come back from that," said Fields. "We thought we'd make that total if we batted smartly. We kept fighting but it was England's day.

"We don't give up in these situations. We only need two wins to retain the Ashes."

Meanwhile, it has been confirmed that the 2014 Ashes series down under will follow the same format and points system, with six points for winning the Test, and two for the limited-overs games.

The solitary Test, in Perth from 10 January, will be followed by three one-day internationals and three Twenty20s, culminating in Sydney on 2 February.