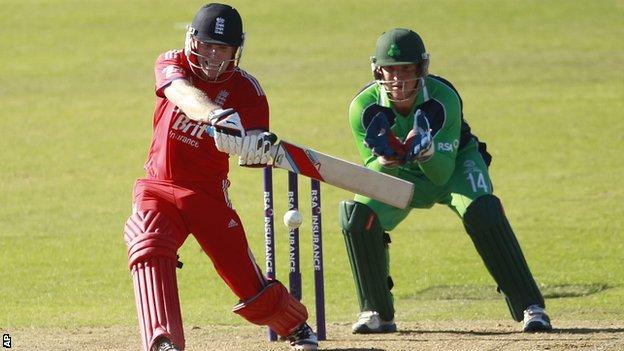 Unbeaten centuries from Eoin Morgan and Ravi Bopara took England to a six-wicket win over Ireland in the one-day international in Dublin.

But captain Morgan (124) combined with Bopara (101) for a world record fifth-wicket stand of 226 to see England home with seven overs remaining.

That total always seemed likely to challenge a youthful England side on a slow Malahide pitch, and so it proved as the accurate Murtagh got to work.

But England rebuilt when London-born Murtagh went out of the attack, with Bopara going on to complete a maiden ODI century and Morgan his first for three years.

They accelerated towards a victory that gives England some momentum going into the five-match one-day series against Australia, which begins at Headingley on Friday.

England, though, must improve before taking on an Australia side that recorded a crushing 200-run win over Scotland.

"They didn't look like they knew what they were doing when it was 48-4. England looked right up against it, it looked like a potential humiliation. But we're in a curious situation at this match. Here we are at Malahide Cricket Club where Eoin Morgan played as a little kid, and he's entranced a lot of people here today with those whiplash shots of his. He's played magnificently - but he's done it against Ireland."

They were not helped by what seemed to be an imbalanced attack, with Rankin, James Tredwell and Steven Finn - the sole player in the England side to have taken part in the Ashes win - selected as the only three frontline bowlers.

Both off-spinner Tredwell, who found turn for his 2-35, and Rankin, who bowled with hostility for 4-46, impressed, but all-rounders Bopara, Ben Stokes and Luke Wright were expensive.

Rankin's late strikes included the wicket of Porterfield, who enjoyed good fortune but also played some eye-catching strokes through the off-side in his sixth one-day international hundred.

The feeling that England had lost control was compounded by the 90 runs plundered by Ireland in the final 10 overs of the innings, one of which was delivered by the occasional off-spin of Carberry.

"We were pretty happy with where we were at, we were right on top but couldn't sustain the pressure," said Porterfield.

The debut of Carberry, who dropped both Niall O'Brien and Porterfield when simple chances were offered on the leg-side boundary, failed to improve when he played across the line to Trent Johnston to become the first England wicket to fall.

Then, when Murtagh removed Wright, Ballance and James Taylor, Ireland looked set for a first home ODI win over England.

Unable to adjust to the lack of pace, Wright played on, Ballance dabbed his second ball through to wicketkeeper Gary Wilson and Taylor was bowled through the gate.

At that point, England looked set for an embarrassing defeat, a repeat of the shock loss at the 2011 World Cup in India.

But Dublin-born Morgan, booed to the crease by some on what was his home ground as a youngster, nudged and swept his way to fifty while Bopara provided support.

After Morgan passed that milestone, the England pair went on the attack, clearing the boundary rope nine times on the way to setting the best fifth-wicket stand in ODI history.

Morgan brought up his ton with a maximum and, after the left-hander was dropped in the deep, Bopara reached three figures by slapping George Dockrell through the covers for four.

Yet another Morgan six off the same bowler wrapped up what was ultimately a comfortable victory, masking the deficiencies of earlier in the day.