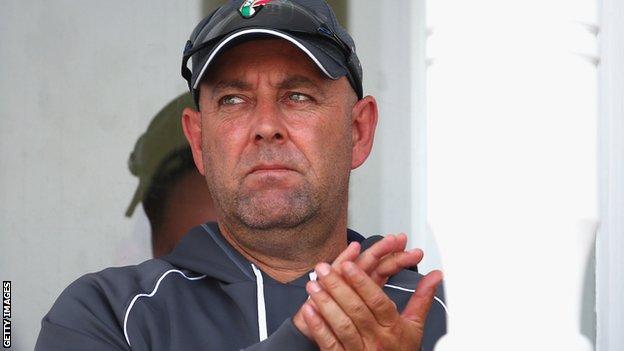 Lehmann accused Broad, 27, after he admitted edging a ball and not walking in the first Ashes Test.

Broad said on Twitter: "Spoke to Darren Lehmann. He apologised for his comments, I accepted. He said they were made in jest for banter. Done."

Lehmann, 43, who received a fine as punishment, believes he can learn from the incident.

Triple M presenter: "The big news is that idiot Broad has finally come out and admitted what we knew, that it came off the centre. He's admitted he's done it on the eve of the Test after they've won the Test series, is he going to cop a bit of action when he comes to the crease?"

Lehmann: "He's been copping it all series, mate. I expect it will continue for a long time yet and I would hope the public get stuck into him when he gets out to Australia. I hope he whinges a lot."

Presenter: "I can't wait. He won't want to be fielding on the third man boundary, I reckon."

Lehmann: "The whole of Australia can help there, which I'm looking forward to."

"It was a good learning curve for a new coach, wasn't it?" he said.

"You know, it was a jovial setting but you've got to learn from that. The players aren't on their own in trying to improve. Coaches have got to improve so that's something I've got to get better at."

Lehmann, who played 27 Tests and 117 one-day internationals for Australia between 1996 and 2005, made the remarks on radio station Triple M before the fifth and final Test.

That meeting ended in a controversial draw after bad light ended play early, meaning England won the series 3-0 and retained the Ashes.

Lehmann was docked 20% of his match fee after pleading guilty to a charge of publicly criticising and making inappropriate comments, although Triple M said it will pay the fine.

Lehmann hopes his side will improve for the return Ashes Test series, beginning on 21 November in Brisbane, with more time to exert his influence.

"It is really hard when you've just come into the set-up and the touring side's been picked," he said.

The ex-Queensland coach added he would be picking a more settled batting line-up in Australia, after the selectors were criticised for regularly changing the order on the current tour.

Australia play England on Thursday when the two-match Twenty20 series begins at Southampton.