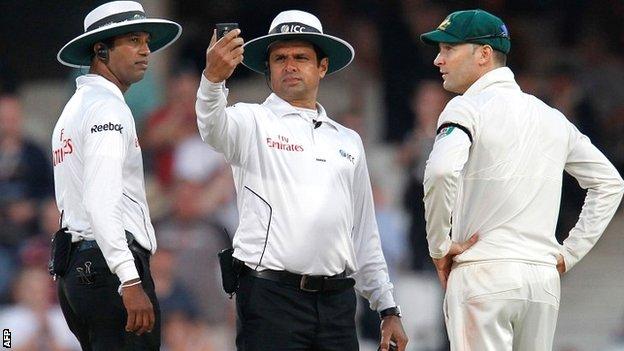 England were denied a probable victory over Australia in the final Test when bad light ensured the match ended in a draw.

"This was always going to happen. Don't blame the umpires or the players... blame the ICC. It's an absolute disgrace. An absolute shambles. The final day of the Ashes has ended in a farce. Let's hope that finally those people in Dubai who run the game realise what a mess this is. It's NOT the umpires' fault."

Set a target of 227 by Michael Clarke's ambitious declaration, England needed 21 more from 24 balls with five wickets in hand when play was halted by the umpires at 7.36pm.

The Oval crowd, who had been treated to an incredible final day in which 447 runs were scored and 17 wickets fell, booed in disapproval before gathering to watch England captain Alastair Cook lift the Ashes urn following a 3-0 series win.

England, who have now won three Ashes series in a row for the first time since 1977-1981, celebrated with a lap of honour while fireworks blazed over the pavilion.

Cook said: "It would have been nice to finish with a win but the rules and regulations are there for a reason. The umpires have strict guidelines and, if it was day three, we would have gone off."

Such an absorbing and ultimately controversial conclusion to the series looked unlikely when England began the final day only four wickets down in their first innings.

But the hosts' aggressive approach on Sunday morning, and Australia's determination to give themselves a chance of a consolation victory, saw Clarke declare his side's second innings on 111-6 at tea and set England a tantalising target in 44 overs.

A partnership of 64 between Cook (34) and Jonathan Trott set England on course before a buccaneering 62 off 55 balls from Kevin Pietersen established the hosts as firm favourites.

After Trott (59) and Pietersen were dismissed in quick succession, Chris Woakes and Ian Bell kept up the pace, but with the light fading rapidly, Australia began to complain.

When Bell was run out by Mitchell Starc for 17, the umpires consulted their light meters, and took the unpopular decision to end the match, denying the full house the finale they desired.

Under International Cricket Council regulations, the umpires were obliged to take the players off once the light had faded to the same level it was when they had stopped play on Thursday evening.

The crowd subsequently jeered the umpires and Clarke during the post-match presentation before applauding Cook's triumphant team as they jogged around the floodlit outfield with flags draped around their shoulders.

The victory margin was their biggest in the Ashes since they won 5-1 in 1978-79 and their best at home since their 3-0 win in 1977 - the last time Australia failed to win a single match against their fiercest rivals.

The result also means England move above India into second place in the ICC Test rankings, while Australia drop below Pakistan into fifth.

After widespread criticism of their obdurate batting on Friday, when they scored 215 runs in 98.3 overs, England set off in far more positive fashion as their final six wickets added 130 in 28.4.

Matt Prior made 47 - his highest score of the series - and Graeme Swann smashed 34 off 24 balls before he was the last man out to give debutant James Faulkner his fourth wicket.

If England's approach had been attacking, then Australia's was an all-out assault as they front-loaded their batting order with big-hitters and set out in pursuit of quick runs.

The result was 111 runs and six wickets in 23 riotous overs, with Stuart Broad taking 4-43 before Clarke, who top-scored with 28 not out, took the decision to declare.

England could easily have batted conservatively to guarantee they finished the series undefeated but they were positive from the outset and would surely have completed a 4-0 victory had the match not been brought to a premature, and farcical conclusion.

"This morning our job was to try and make it as difficult as possible to stop Australia from pushing on for a win and to make our chances of victory easier," added Cook.

"The crowds have been fantastic for all five Tests and I'm privileged to captain this group of guys. Winning this series is the proudest moment of my life."