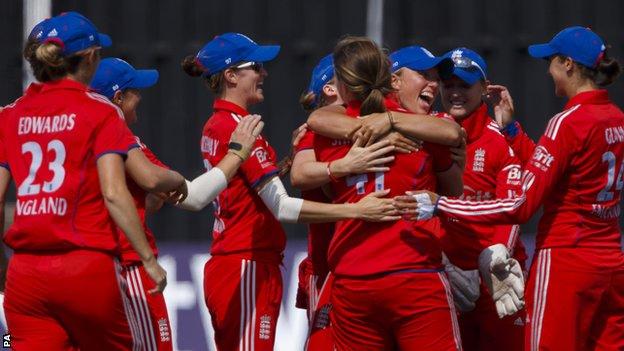 England took control of the Women's Ashes after beating Australia by five wickets in the third one-day international at Hove.

In a rain-shortened match, Danielle Hazell took two wickets as England restricted Australia to 203-4 in 36 overs.

Charlotte Edwards's side, who also won the second ODI, were awarded two points for the win, meaning they go 6-4 in front in the multi-format series ahead of three Twenty20 internationals which also carry two points for a win.

It means they still need two victories to be sure of winning the urn back from Australia, who won the solitary Test down under in 2011, but England have all the momentum following their last two victories.

Classy knocks from Knight and Taylor carried England to a fairly comfortable victory at Hove, with the pair putting on 126 runs for the second wicket.

They gradually accelerated their innings, with Knight hitting four boundaries in her 65-ball knock and Taylor also going at more than a run a ball.

Both were dismissed in quick succession, but stubborn middle-order batting from Lydia Greenway (18) and Arran Brindle (11) helped England edge towards victory before 21-year-old Sciver (18 not out) and Gunn (3 not out) finished the job.

Earlier, Meg Lanning's 64 laid the foundation's for Australia's total, with Ellyse Perry (45) and Alex Blackwell (35) hitting some late boundaries to push the score above 200 - Anya Shrubsole and Holly Colvin taking a wicket apiece to go with Hazell's 2-36.