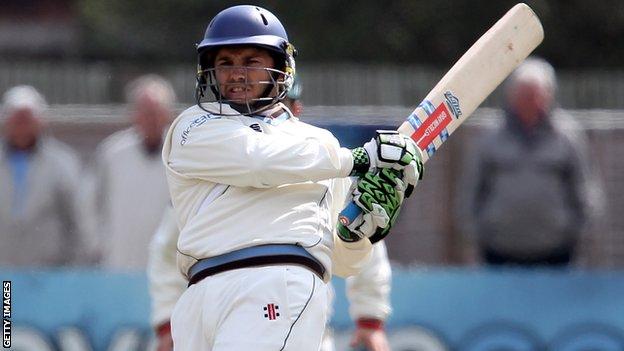 Essex batsman Greg Smith hit 149 not out as the visitors closed day one on 310-5 against Gloucestershire.

The hosts started well with Will Gidman bowling Gautam Gambhir for a duck as the India opener's poor form continued.

Since joining in August, Gautam Gambhir has sandwiched County Championship knocks of 31 against Northants and 0 against Gloucestershire with just 23 runs in two YB40 innings.

Smith did the lion's share of the scoring as he and Foakes (32) put on 94 before Essex lost two late wickets.

It represented an excellent recovery for the visitors after Gambhir, who joined the county in early August, failed to trouble the scorers.

Then Mickleburgh could not capitalise on a decent start, edging Graeme McCarter to the wicketkeeper with the score on 44.

Shah batted fluently, 28 of his runs coming in boundaries, before he was trapped lbw by Craig Miles.

Ten Doeschate and Foakes then followed his lead by getting out having played themselves in.

But Smith remained unruffled, closing 16 runs short of a career-best, despite the distraction of losing James Foster and Graham Napier late on.

The two sides lie third and fourth in the Division Two table, with Essex a point better off - and with a game in hand.

But, with Lancashire almost out of sight at the top of table, both sides need to focus on reducing the deficit to second-placed Northants, Essex trailing them by 31 points and Gloucestershire by 32.