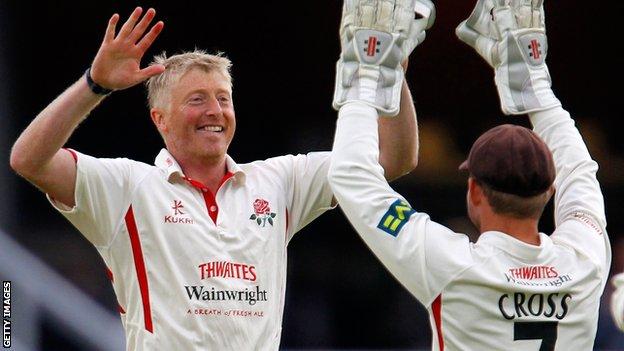 Lancashire took another significant step towards promotion by completing a nine-wicket win over Worcestershire on the final afternoon at New Road.

The home side only managed to add 75 to their overnight 166-5 after Moeen Ali fell in the fifth over of play for 109.

Kyle Hogg, Glen Chapple and Tom Smith each finished with three wickets as Worcestershire were all out for 241.

Luis Reece then hit an unbeaten 56 as Lancashire sealed their seventh win of the summer by reaching 88-1.

Paul Horton went cheaply when he cut a ball from Graeme Cessford to point, but after a short interruption for bad light, Reece reached a 44-ball half century with a straight six off Moeen's off-spin and Ashwell Prince (19 not out) brought the game to an end with a boundary from the final ball of the 19th over.

The result puts them 34 points clear of second-placed Northants, and even more importantly a massive 65 points ahead of Essex in third, with only the top two going up.

Moeen's liking for the Red Rose

To have any chance of saving the game, Worcestershire needed Moeen, who also made 104 in their first innings, to remain at the crease for a significant part of the day.

However, he feathered a catch to Gareth Cross off Chapple (3-53), one of five taken by the Lancashire wicketkeeper in the innings, and Hogg (3-58) and Smith (3-40) cleaned up the tail.

Moeen's second century of the match took his tally of first-class runs for the summer to 1,229 and with four games of the season still to go, the England Lions batsman is on course to better his 2010 career-best season aggregate of 1,270.