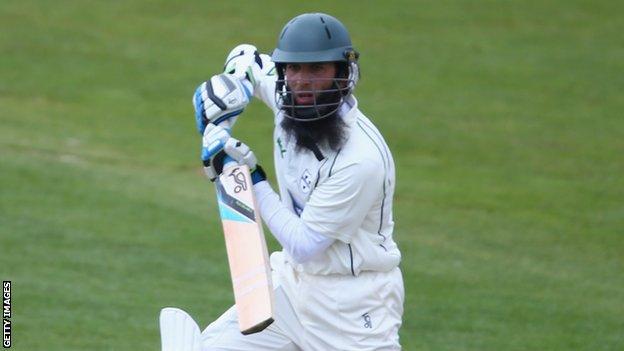 Moeen Ali shone for Worcestershire with his second century of the match, but his side faces a battle to avoid defeat against Lancashire.

Moeen hit an unbeaten 101 as the hosts made 166-5 after Division Two leaders Lancashire were dismissed for 441.

Luke Procter (76) and Tom Smith (84) put on 136 for the seventh wicket as Graeme Cessford and Alan Richardson both took four wickets.

"It is to Worcestershire's credit that they will go into the final day still fighting and in a position to make Lancashire work hard for their inevitable-looking victory.

"A poor morning with the ball was rectified after lunch when the final four Lancashire wickets were mopped up but, by then, Procter and Smith's muscularity had ensured the deficit was over over 150.

"While Worcestershire will enjoy another marvellous innings from Moeen, it again uncomfortably illustrated how reliant they are on the left-hander.

"There cannot be batter in the country more in control of his game at the moment, but he will have to score another hundred on the final day if Worcestershire are to avoid defeat - although, on this form, it is not totally out of the question."

"A fascinating day of cricket which ended with an excellent display of rearguard batting from the home side led once again by Moeen Ali, who ended unbeaten on 101 - his second century in the match.

"Lancashire still hold the advantage thanks to a fine partnership between Tom Smith and Luke Procter, which was worth 136 runs for the seventh wicket.

"The Division Two leaders batted well and were able to secure maximum batting bonus points for the first time this season.

"They will feel very confident about clinching their seventh win of the season, but could still yet face a testing run chase."