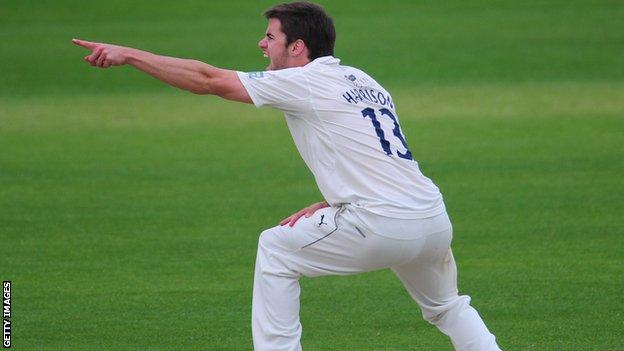 Durham seamer Jamie Harrison took 5-31 as Surrey crumbled to 108 all out and 52-3 after being asked to follow-on.

After an hour's delay, the visitors resumed on 94-6 and once Gareth Batty departed, Harrison polished off the tail for a maiden five-wicket haul.

Harrison continued in the same vein when Surrey batted again, bowling Arun Harinath for a duck in the third over.

Only 22.4 overs were bowled at Chester-le-Street, but the home side still look well-placed for victory, thanks in no small part to the left-arm swing of Harrison.

In his first Championship match in over a year, he continued to capitalise on the opportunity resulting from injuries to seamers Graham Onions and Callum Thorp by pinning Chris Tremlett lbw before winning another decision from the umpire after rapping Tim Linley on the boot with an inswinging yorker.

He then uprooted Jade Dernbach's off-stump as Steven Davies was left stranded on 41 not out.

Surrey's second innings began badly and Arshad then induced an edged drive from left-hander Burns which Scott Borthwick caught at slip and Solanki gloved a leg-side catch to wicketkeeper Phil Mustard, leaving Hashim Amla (32 not out) and Zander de Bruyn (two not out) at the crease as Division One's bottom side teetered on the brink of defeat.