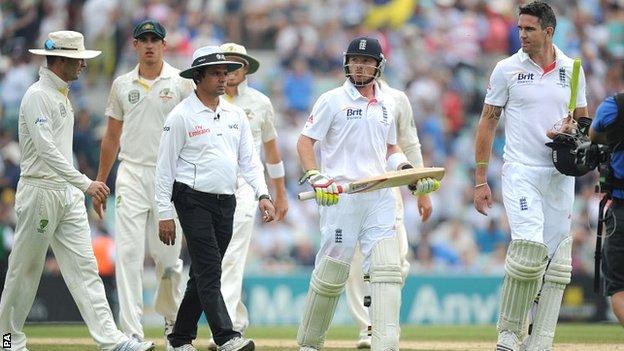 A conservative batting performance steered England towards safety in the final Test against Australia and lifted their chances of ending the Ashes series undefeated.

Joe Root found some form with 68 and Kevin Pietersen made a patient 50, but there was another failure for captain Alastair Cook, who was caught behind for 25.

Ian Bell ended the day unbeaten on 29, alongside debutant Chris Woakes, who drove the first ball of his Test career through the covers for four on his way to 15.

With significant rainfall forecast for Saturday, England's approach should ensure they salvage the draw they require to win the series 3-0.

But after an underwhelming performance from the home side with bat and ball, it looks as though Australia will finish the series in the ascendancy and carry more momentum into the return series down under, starting in November.

England's openers, who survived a testing period on Thursday evening to reach 32-0, advanced to their highest partnership of the series - 68 - before Cook perished.

"There have been some memorable games at The Oval down the years, but this is not one of them. What hurts is that all the talk before the game was about how they were going to play to win and they wouldn't use it as an end of season match.

"Talk is cheap, and it's what you dish up what matters. They talked it up but haven't backed it up."

The skipper, who is averaging only 27 for the series, had just survived a reviewed appeal for leg before wicket from Ryan Harris, but fell in the fast bowler's next over when he hung his bat out and nudged one through to wicketkeeper Brad Haddin.

Root's half-century, which included 11 boundaries, owed a lot to his decision to play forward more often than in previous innings, where a tendency to stay on the back foot to the seamers had frequently brought about his downfall.

This time it was Nathan Lyon who took Root's wicket, the 22-year-old Yorkshire batsman falling into a trap that had been set by Michael Clarke and top-edging a sweep to Shane Watson at short long leg.

Jonathan Trott scored only two boundaries as he ground out 40 off 134 balls in a particularly torpid period before tea.

His quest for a first half-century of the series was thwarted by Mitchell Starc who trapped him lbw in front of leg stump with the first delivery with the second new ball.

Pietersen's 133-ball half century was his second slowest in Tests and featured only four boundaries.

On his home ground, the Surrey batsman found off-spinner Lyon particularly difficult to get away, but it was Starc who eventually removed him when a thin edge off a full delivery flew low to Watson at slip.

Woakes, brought in to replace Jonny Bairstow at number six, drew one of the biggest cheers of the day when he creamed his first ball for four to evoke memories of David Gower, who did the same on his debut in 1978.

But the day finished in a manner far more characteristic of what had gone before as Bell and Woakes blocked out the final few overs to keep six wickets intact at the end of a session in which 66 runs were scored in 34 overs.