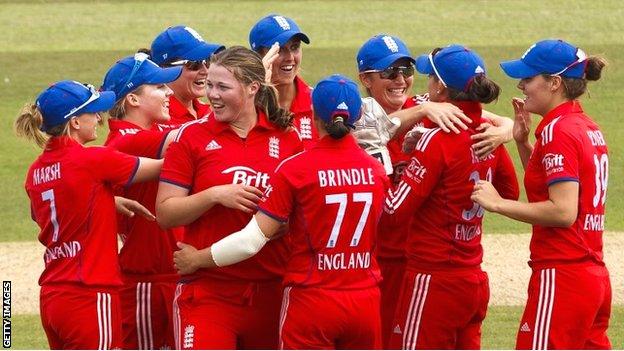 England levelled the Women's Ashes series with a 51-run win over Australia in the second one-day international.

Australia lost both openers for ducks within four overs and, though Jess Cameron hit 10 fours in her 81, they were all out for 205 in the 49th over.

The new series points system collates a Test, ODIs and Twenty20s and continues with the final ODI at Hove on Sunday.

Six points are awarded for a Test win, two for a draw and two for a victory in either of the limited over formats.

After a drawn Test, Australia, who currently hold the Ashes after a seven-wicket victory in a one-off Test in January 2011, went ahead in the current series with a 27-run win in Sunday's opening 50-over match at Lord's.

But Edwards, in her 171st ODI, quickly took command at Hove, sharing 45 in seven overs for the first wicket with Heather Knight, who hit six fours in her 31 from 26 balls.

Pace bowler Katherine Brunt claimed the wicket of Rachael Haynes in the third over of Australia's reply.

Cameron kept their hopes alive with her eighth ODI half-century before she was the seventh wicket to fall, bowled by Brunt in the 38th over with 103 still needed.

England seamer Anya Shrubsole won the Player of the Match award and said: "It was a really good all round performance, the batters batted brilliantly and put the runs on the board and we knew we had to come out here and do a job with the ball and we did that.

"We knew coming out here on a good pitch you always want to take early wickets and that's what Katherine and I wanted to do."

Cameron, who passed 1,000 ODI runs during her 108-ball innings, said: "It was nice to get some runs on the board but at the end of the day it's a team game and we didn't get the result that we wanted.

"I was hitting the ball well but at the period of our five powerplay overs that we took, we didn't do a good enough job."