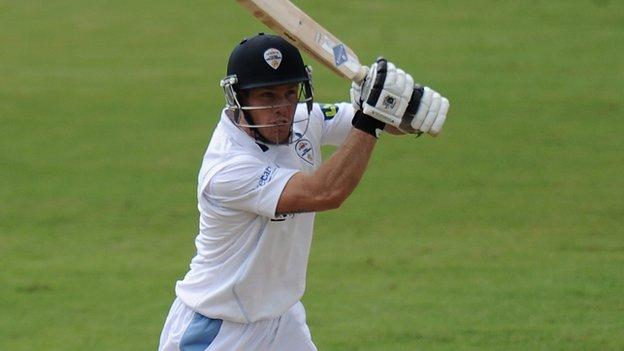 Richard Johnson scored a vital half century to give Derbyshire a chance of victory over Middlesex after 16 wickets fell on the third day.

The visitors resumed on 197-6 needing 39 to avoid the follow-on and, thanks to Ollie Rayner's 52 not out, they passed their target but were all out for 249.

Derbyshire had a 136-run first-innings lead, but then slipped to 16-3.

Joe Denly fell to Mark Footitt for two while England paceman Steven Finn, sent in as a nightwatchman, was out for his second duck of the day, both batsmen trapped leg before.

Sam Robson (12 not out) and Adam Voges (11 not out) steered the visitors to the close, but still requiring another 272 for a victory to boost their title hopes.

First time around, Rayner and John Simpson (36) ensured Middlesex claimed a batting point, although they fell one run short of second when Footitt (3-69) wrapped up the innings with the dismissal of Finn.

Ben Slater, Chesney Hughes and captain Wayne Madsen were out for single-figure scores as Derbyshire found it hard going in their second innings.

Johnson, who passed 50 for the third time in the Championship this season, was given support by Shivnarine Chanderpaul (32), Alex Hughes (24) and Tim Groenewald's 20 from 21 balls but the home side were bowled out in 63.3 overs to leave the outcome in the balance.

"Another good day for Derbyshire, Tim Groenewald, Mark Footitt and Matt Higginbottom each finishing with three wickets as Middlesex were bowled out for 249.

"Derbyshire suffered an alarm prior to lunch as three quick wickets fell, but Richard Johnson and Shivnarine Chanderpaul helped steady the ship.

"Middlesex stuttered in the run chase to set up an exciting final day."

"Middlesex have it all to do despite a dominant third day at Derby.

"Ollie Rayner was the star with bat and ball as he registered his first half-century of the season and went on to claim a five-wicket haul as Derbyshire's push for back-to-back wins slowed.

"One of Sam Robson and Adam Voges will need to push on to a century if the visitors are to get close but, once they're past the new ball, the pitch shouldn't hold too many demons."