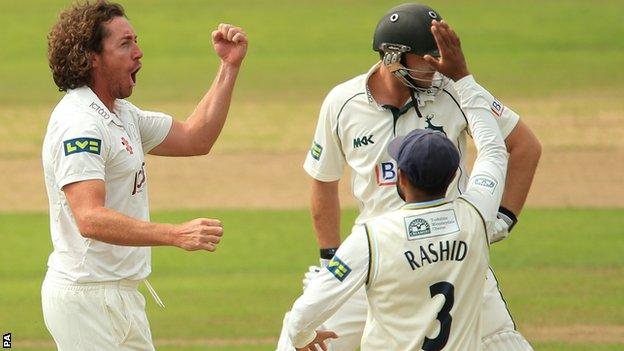 Sidebottom then took 4-35 against his former club as he and Paterson (5-43) created havoc to reduce Notts to 65-8.

Jack Brooks, who only bowled six overs in the home side's first innings, had Alex Hales caught behind and Sidebottom then grabbed his fifth wicket of the game to dismiss Steven Mullaney for six.

Michael Lumb made a rapid 20 but was caught and bowled by Liam Plunkett, who struck again when sub Richard Pyrah took a memorable one-handed boundary catch to send Samit Patel on his way for 37, leaving David Hussey and Riki Wessels to see Notts through to the close.

Earlier, Yorkshire found runs easy to come by as England discard Bairstow and Patterson ensured a fourth batting point for the visitors with the highest stand of the innings.

Andre Adams (2-95) wrapped things up by bowling Bairstow - who hit 11 fours - while wicketkeeper Chris Read had earlier claimed his sixth catch to see off Patterson.

Notts made a disastrous start in reply as Sidebottom, who spent six years with the club Notts, took the early wickets of England's Twenty20 opening pair Hales and Lumb, both for ducks.

The hosts were 24-2 at lunch, Patterson seeing off Mullaney (13) in the first over after the interval before he and Sidebottom continued to rip through Notts, reducing them to 78-8 when they were rescued only by a rain delay.

After the enforced break, Adams struck three sixes and three fours in 17 balls at the crease, while Shahzad hit and a six and four fours to at least save some face for Notts.

But spinner Adil Rashid wrapped things up by getting rid of Harry Gurney and Yorkshire skipper Andrew Gale had no hesitation in enforcing the follow-on.

"Nottinghamshire's capacity to blow hot and cold has rarely been illustrated as clearly as today.

"Despite the loss of James Taylor to the Lions, the batting order boasts enough quality to compete on any surface, against any attack.

"Meekly surrendering, Notts lost 14 wickets in just 62 overs to a side that made 407 on the same surface.

"However poor the home side might have been though, every credit should go to Yorkshire, worthy Championship leaders."

"Yorkshire are pushing for victory after an impressive show on the second day.

"It was a dreadful afternoon for Notts as, thanks to excellent bowling by Steve Patterson and Ryan Sidebottom, and some poor shot selection, they crumbled to 78-8 at tea.

"Steve Patterson is having a fine all-round match, having earlier hit a valuable 40 with the bat."