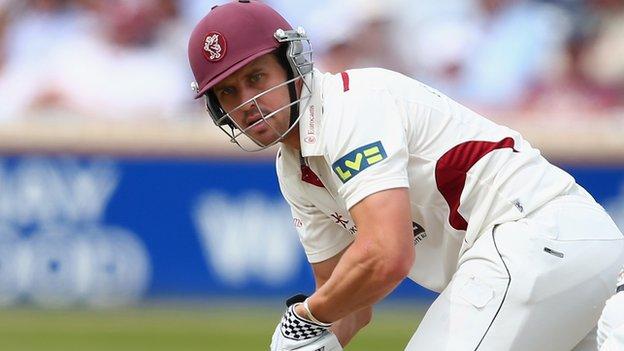 Discarded England opener Nick Compton showed his suitors Warwickshire what they will be missing next summer with an unbeaten 83 at Edgbaston as Somerset set up an intriguing final day.

Overnight centurions Laurie Evans, who reached 138, and Ateeq Javid (133) were bolstered by Darren Maddy (40 not out).

But, after turning down an offer to join the Bears, Compton then helped Somerset close on 133-2, a lead of 66.

Compton's decision to sign a new contract with Somerset on Thursday morning, in the wake of Warwickshire's approach a day earlier, made for an encouraging start to the day for the visitors.

"Somerset had the better of the third day to make the draw the most likely result, although the state of the Championship gives both teams every incentive to push for a win if they possibly can.

"A needless late run out gave Warwickshire some encouragement, but they will need to hasten through the Somerset batting in the morning to have a chance. Jeetan Patel may well be the key man."