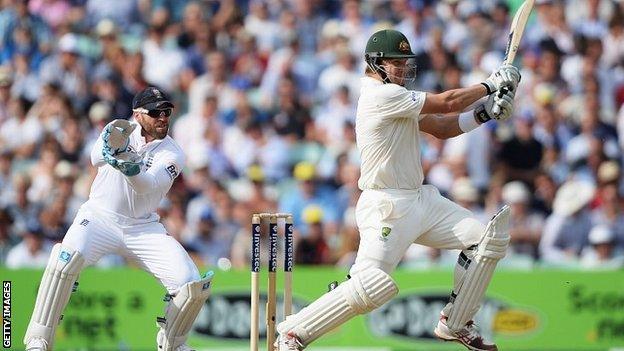 Shane Watson dismantled a new-look England attack to blast his first Ashes century and put Australia in a commanding position in the final Test at The Oval.

Watson scored a superb 176 - his highest Test score - and Steve Smith made an unbeaten 66 as the tourists reached 307-4 at the close of a disappointing day for the home side, who are targeting a first 4-0 series victory over their oldest rivals.

Watson was particularly disdainful towards Chris Woakes and Simon Kerrigan, who were both surprisingly handed their Test debuts as part of a five-man England attack.

"Simon Kerrigan was not talked about as playing for England until Monty Panesar had his problems. They've gone and thrust him in, but he's bowling in the second division of the Championship this season. That doesn't cut it in international cricket. Look at his performance for the Lions last week, he didn't pull up any trees. The selectors have got this one wrong."

The duo, who replaced Jonny Bairstow and Tim Bresnan, both went wicketless, with left-arm spinner Kerrigan allowing nerves to get the better of him as he conceded 53 runs in eight overs.

The Lancashire bowler's main tormentor was Watson, who plundered 80 runs before lunch on his way to his first Test hundred in 48 innings.

Batting at number three - his fourth different position of the series - Watson put a difficult tour behind him with a dominant innings, featuring several powerful drives and pulls to the boundary.

The 32-year-old gave one chance, when Alastair Cook put down a straightforward opportunity to catch him for 104 at first slip off the bowling of James Anderson, before finally falling three overs before the close when he holed out to Kevin Pietersen at deep backward square leg.

Anderson, bowling with far greater rhythm than he did in the previous two Tests at Chester-le-Street and Old Trafford, had given the hosts an early breakthrough with the first of two wickets that took him past Bob Willis into second place in England's all-time list with 326 scalps.

After Australia captain Michael Clarke had won the toss and chosen to bat, David Warner was drawn into driving at a delivery shaping away from him and nicked the ball through to wicketkeeper Matt Prior for six.

Watson swiftly swung the momentum back towards Australia with an unforgiving assault on England's two debutants.

Warwickshire all-rounder Woakes, who will bat at number six in England's innings, was hit for three fours in an over as his first 30 balls cost as many runs, while Kerrigan was clobbered for 28 from his first two overs.

Lunch gave England vital breathing space and they responded with a much-improved display in the afternoon session.

Chris Rogers was caught at slip off Graeme Swann for 23, before Stuart Broad struck Michael Clarke on the gloves and Watson on the head with sharply rising bouncers in a high-class spell.

Clarke, clearly expecting further short balls, was then late on a full delivery from Anderson and bowled off his pad.

"I made my Test debut in the Boxing Day Ashes Test at the MCG in 1990 but I can't remember my first two balls. Then Dean Jones came down the wicket to my third delivery, hit me at the point of the ankle and woke me up to what was going on.

"I was told the night before that I was playing, which made for a sleepless night, but at least gave me time for the news to sink in. Maybe Simon Kerrigan was only told he was playing today because nerves clearly played a part.

"You just want to get a couple of good overs under your belt, but Shane Watson never let him settle and he never really recovered from a disappointing start."

At the other end, Watson kept his composure through the nineties to bring up his third Test century off 116 balls - and first in 48 innings - with a drive through the covers off Anderson.

The tall right-hander's understated celebration belied the sheer relief he must have been feeling at finally converting a half-century into the kind of score that can influence the outcome of a match.

Watson found a steady accomplice in Steve Smith, who struck nine fours and a six in his third half-century of the series as Australia cemented their advantage in the final session.

Woakes, whose line and length improved as the day wore on, thought he had his first Test wicket when Watson was given out lbw for 166, only to be reprieved by the decision review system, which showed the ball was clearing the stumps.

England did, however, end a difficult day on a high note when Watson took on one short ball too many and was athletically caught by a diving Kevin Pietersen on the square leg boundary.

With nightwatchman Peter Siddle at the crease, the hosts will be hopeful of making further inroads in the morning as they look to claw their way into the match.