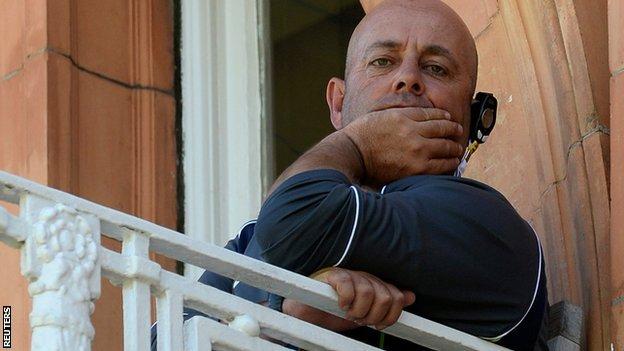 Australia coach Darren Lehmann has called on fans to make England's Stuart Broad "cry" over his "blatant cheating" in the first Ashes Test.

Broad was criticised for deciding not to walk after edging Ashton Agar to slip via keeper Brad Haddin's gloves.

Triple M presenter: "The big news is that idiot Broad has finally come out and admitted what we knew, that it came off the centre. He's admitted he's done it on the eve of the Test after they've won the Test series, is he going to cop a bit of action when he comes to the crease?"

Lehmann: "He's been copping it all series, mate. I expect it will continue for a long time yet and I would hope the public get stuck into him when he gets out to Australia. I hope he whinges a lot."

Presenter: "I can't wait. He won't want to be fielding on the third man boundary, I reckon."

Lehmann: "The whole of Australia can help there, which I'm looking forward to."

Listen to the Triple M interview

"I hope the Australian public give it to him right from the word go for the whole [Australian] summer," he said.

"And I hope he cries and goes home. I don't advocate walking, but when you hit it to first slip it's pretty hard."

He added in the interview with Australian radio network Triple M: "Certainly our players haven't forgotten, they're calling him everything under the sun as they go past so I would hope the Australian public are the same because that was just blatant cheating."

The fifth and final Ashes Test of the English summer starts on Wednesday at the Oval, with England chasing their first ever 4-0 home win, while the return series starts in Brisbane on 21 November and finishes in Sydney in early January.

"It wasn't as clear-cut as everyone had thought, although I knew I'd hit it," he said.

"There is no debate, it's quite simple. The Australians I have played with and have watched, with the exception of Adam Gilchrist, believe in standing and it's up to the umpire to give you out - there shouldn't be a moral argument."

Because they had already failed with two reviews during the second innings, Australia were unable to review umpire Aleem Dar's not out decision.

Broad was on 37 at the time and went on to add a further 28 runs to his score as England secured victory by only 14 runs.

After Triple M presenter described Broad as "an idiot", Lehmann said: "I hope everyone gets stuck into him. The way he has carried on is ridiculous.

"He knew he hit it at the slip. The biggest problem there is the poor umpire cops all the crap that he gets in the paper and Stuart Broad makes him look like a fool.

"From my point of view it's poor, so I hope the public get stuck into him."

He told BBC Radio 5 live: "That is just Darren Lehmann. I'm sure they were said a little bit tongue in cheek.

"He feels his side is in the spotlight coming into this Test and he is trying to deflect a little bit of pressure off himself and the side.

"Cricket Australia needs to tell Darren to zip it. He's out of order. Broad's going to cop a bit of heckling, but don't pour petrol on it."

"Make him cry and things? I'm sure they were said in jest.

"You expect that before you go down under but I think Stuart Broad is big enough and ugly enough to handle that kind of pressure from the Aussies.

"I am sure it will just spur him on."

Former England captain Nasser Hussain reckons the all-rounder will be fine on the pitch, but might need more managing off it.

"These boys go out on an evening, they don't sit in their hotel room," Hussain told Sky Sports.

"That's more likely where Broad will have to be careful because after these words, there might be some Aussie out there that, after having a few beers on an evening, wants to have a little go at Broad.

"But these are grown men, they can look after themselves and know how to behave like England cricketers, hopefully."

ABC commentator Jim Maxwell thinks Lehmann's comments are "incendiary" and believes he should be given a warning by Cricket Australia.

Maxwell told BBC Test Match Special: "It's obviously an issue that's been simmering since the Trent Bridge Test match and for some reason Darren's gone public. It sounds a bit like pub talk but he is the Australia team coach and he should be a little more careful.

"It's incendiary to be saying that before a home Test series against England. We all know what happens when people have a bit of juice at a Test match.

"Cricket Australia needs to tell Darren to zip it. He's out of order. Broad's going to cop a bit of heckling, but don't pour petrol on it."