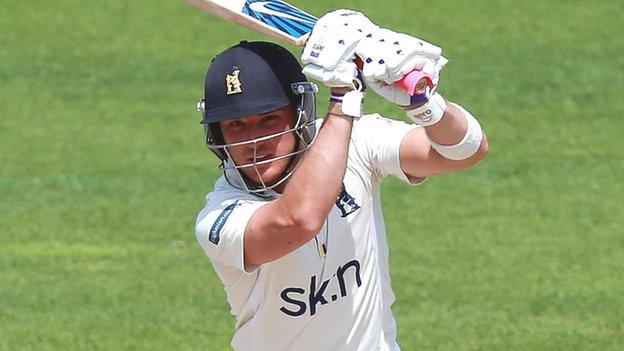 Warwickshire batsmen Laurie Evans and Ateeq Javid shared a double century partnership to rescue their side on day two against Somerset at Edgbaston.

Replying to Somerset's 340 all out the previous day, the Bears looked in some peril at 38-3 after visiting spinner George Dockrell struck twice.

But Evans and Javid put on a so far unbroken 245 for the fourth wicket.

Evans scored more quickly to finish the day on 130, while the obdurate Javid hit 103, his maiden first-class ton.

It looked grim for the county champions when, after Peter Trego had Ian Westwood caught behind half an hour into the day, left-arm spinner Dockrell then removed nightwatchman Recordo Gordon, after a 70-minute siege, and stand-in skipper Varun Chopra.

But Evans joined Javid to respond in fine style to reports that the Bears are hoping to sign two England batsmen, Nick Compton and Jos Buttler.

Evans ensured that this would be his breakthrough season last month when he hit his maiden Championship hundred, a career-best 178 against Nottinghamshire.

But, having twice previously got out in the 80s, Javid reached the same landmark late in the day.

"The partnership between Ateeq Javid and Laurie Evans not only changed the course of the match but may well have given Warwickshire supporters a long look at the medium-term future of their top-order batting.

"They have played plenty of cricket together in the 2nd XI and this is not the first time they have batted together productively in the Championship in recent weeks.

"Evans followed up his maiden Championship hundred against Notts, while Javid's first century in first-class cricket arrived in the penultimate over of the day."