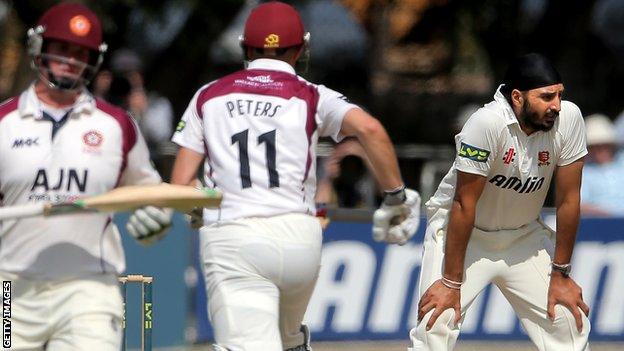 Batsmen David Sales and Stephen Peters overshadowed Essex debutant Monty Panesar as second-placed Northants made 343-5 on day one at Colchester.

Panesar had to wait until his 30th over to claim his first victim, having Alex Wakely caught at cover for 49.

Sales had earlier followed an unbeaten 255 against Gloucestershire with 131 and Peters made 101 in a stand of 205.

Essex fought back well by picking up three wickets in the final session, as Panesar ended with figures of 1-72.

In all he sent down 34 overs, 14 of them maidens, and it was exactly the kind of prolonged workout he was hoping for after arriving on loan from Sussex, but David Masters was Essex's most successful bowler with 2-77 after removing James Middlebrook and Peters before tea.

Having won the FLt20 trophy last Sunday after beating Essex in the semi-finals, Northants began the match with the aim of widening the 27-point gap between themselves and Gloucestershire in third place, and they were boosted by the return of Australian paceman Trent Copeland.

He was not needed, though, as skipper Peters opted to bat first and he and Sales made the most of excellent batting conditions, collecting 31 boundaries between them - with Sales also hoisting a six off Panesar.

The scoring rate was checked by the home side, however, and Essex's second new face, India's Gautam Gambhir took a slip catch to dismiss Ben Duckett off Reece Topley for 25 as Northants closed with 57 needed off 13 overs on the second morning to secure maximum batting points.

"All eyes were on Monty Panesar, making his debut for Essex, but the attention was taken by centurions Stephen Peters and David Sales, who simply took the Essex bowling apart on what looked to be a batsman's paradise.

"There was very little assistance for the Essex bowlers as the hot weather and the Castle Park surface had them toiling and the ball disappearing to all parts, but the final session did offer a glimmer of hope that they could restrict the visitors.

"Panesar struck by having Wakeley caught low down by Ravi Bopara, but the worrying thing from an Essex point of view is the wicket appeared to start offering turn, and with the home side having to bat last in the game they could find themselves up against it."

"A very satisfying return to four-day action for Twenty20 champions Northants, which began when Stephen Peters called correctly to win the toss.

"While they batted well, only a score of 450-500 will satisfy them in a game Essex have to win to boost their own promotion hopes.

"The ball is already turning for Monty Panesar, but James Middlebrook should bowl last for Northants on this pitch and his off-spin could be the key to victory."