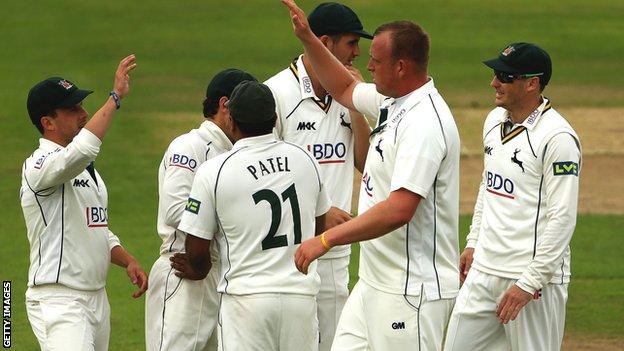 Luke Fletcher took the second five-wicket haul of his career as Nottinghamshire hit back against Division One leaders Yorkshire.

After the Tykes' solid start, paceman Fletcher (5-66) struck with two wickets in two balls, including debutant Kane Williamson for a golden duck.

Fletcher returned to take the scalps of Adam Lyth (95) and Adil Rashid (78).

Jonny Bairstow, released by England in the morning, ended on 24 not out as Yorkshire closed on 327-8.

Bairstow was not needed at The Oval as England opted to go with five bowlers for the final Test of the Ashes series against Australia.

The 23-year-old, who averaged 29 in seven innings in the series with a top score of 67, came into bat at Trent Bridge at number eight.

Notts wicketkeeper Chris Read has so far taken five catches in the innings to move ahead of Bruce French and into second in the county's all-time dismissals list.

Harry Gurney (3-60) claimed the early wicket of Alex Lees who was caught behind by Read for eight, while Fletcher trapped Phil Jacques lbw for 19.

Fletcher saw off Andrew Gale for a patient 33 and immediately had New Zealand international Williamson caught by Samit Patel to leave Yorkshire on 137-4.

Lyth, who hit 14 fours in his 168-ball knock, passed 500 runs for the season before becoming a fourth wicket for Fletcher.

Rashid shared half-century partnerships with Lyth and Liam Plunkett (41), but was Fletcher's fifth victim before the Notts paceman left the field with cramp.

Gurney got the wicket of former Notts man Ryan Sidebottom for a duck, but Bairstow ensured that Yorkshire closed the day in a good position.

"Honours were just about even at the end of a pulsating day which saw Yorkshire pegged back after a flying start.

"Luke Fletcher's five-for was well-deserved and overdue and he received fine support from Harry Gurney, who claimed the other three wickets to fall.

"Chris Read achieved a notable milestone, his five catches having taken him past Bruce French on the Notts' all-time list for top wicket keepers, and only five beyond the record holder, Thomas Oates."