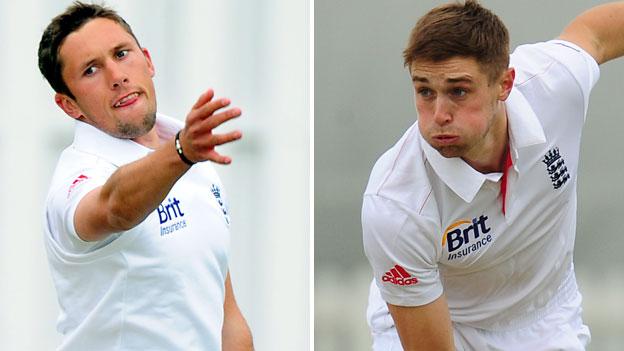 Uncapped Simon Kerrigan and Chris Woakes have been named in the England squad for the fifth Ashes Test against Australia at The Oval.

England lead the series 3-0 after a 74-run win in the fourth Test in Durham.

Onions, 30, missed out on selection for the match on his home ground of Chester-le-Street then suffered a broken finger while playing for Durham.

Yorkshire's Bresnan, meanwhile, has a stress fracture of the back that will keep the 28-year-old out for the rest of the season.

"Tim Bresnan has made valuable contributions with both bat and ball during the series and I would like to wish him all the very best in his recovery from his back injury," said national selector Geoff Miller.

"The focus for Bresnan now will be the tour of Australia later this year while this Test will provide an opportunity for another member of this squad to make equally vital contributions.

The injuries mean a recall for Steven Finn and a call-up for Woakes, who has taken 27 first-class wickets at an average of 22.77 this season.

England selected Monty Panesar in their squad for the third Test at Old Trafford, but the Sussex left-arm spinner has since been fined by police for urinating on nightclub bouncers in Brighton.

Kerrigan, 24, who has taken more first-class wickets than any other spinner this summer, claimed 1-66 for England Lions in their drawn two-day game against Australia.

Miller added: "The inclusion of five pace bowlers as well as an additional spinner in Simon Kerrigan who has impressed with Lancashire and England Lions in recent years gives Andy Flower and Alastair Cook plenty of options once they have assessed the conditions at the Kia Oval."

Kerrigan has taken 47 wickets at 20.23 in the County Championship this summer, making him one of the top performing spinners in the country.

The 24-year-old said: "I'm delighted to be selected, but it was a bit hard to take in when he [Miller] rang. It all felt a bit surreal to be honest.

"Hopefully I can impress over the next couple of days and be ready if they choose two spinners."