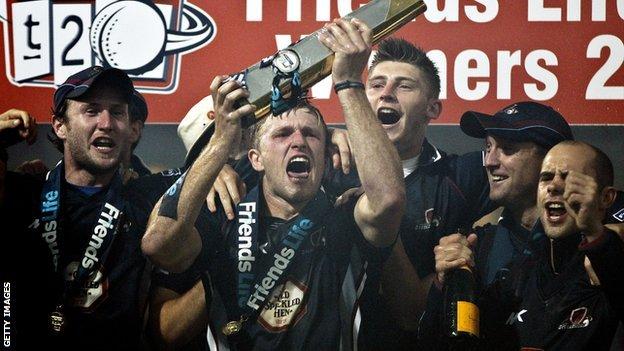 David Willey ended the match with a hat-trick as Northamptonshire secured their first FLt20 title with a thumping 102-run victory over Surrey.

In a match reduced to 18 overs a side by rain, Willey smashed 60 off 27 balls to get Northants off to a flier.

Surrey were bowled out for just 92 as Willey claimed 4-9.

In a performance to remember, the Northampton-born all-rounder also took a catch and ran out Surrey batsman Steven Davies in addition to his heroics with bat and ball.

His hat-trick provided a fitting finale for what has been an incredible campaign for Northants, who struggled badly in last year's competition and had won just three of their last 22 Twenty20 matches before the start of this season.

The vast majority of the damage was done with the bat as Willey, White and captain Wakely put on an eye-catching display of big hitting under the lights in Birmingham.

Northants looked well set on 37-0 midway through the fourth over before Richard Levi, hero of the semi-final win over Essex, was bowled by Azhar Mahmood.

The rain, which had threatened for much of the day, finally arrived moments later, forcing the players off for the best part of an hour.

But when the teams returned with four overs of the match lost, a lively Edgbaston crowd was immediately rewarded for its patience.

Willey bludgeoned 20 off a Jade Dernbach over and soon after clubbed Jon Lewis high into the stands to complete a 19-ball half century - the fastest of this year's T20 competition.

The 23-year-old was only opening after a wrist injury forced Kyle Coetzer out of the final and, although he was caught by Gary Wilson attempting one stroke too many off Lewis, his innings, which included four sixes and six fours, had set the tone.

Northants' 194-2 was the highest total in a domestic Twenty20 final, surpassing the 187 made by Middlesex against Kent in 2008, despite facing only 18 overs

Wakely and White continued to target the wayward Dernbach, who ended with figures of 0-53 having been instrumental in Surrey's semi-final win over defending champions Hampshire.

And he was not alone in suffering the wrath of Northants' top order as Wakely smashed Azhar Mahmood's final ball for six to leave them strong favourites at the midway point.

Surrey openers Jason Roy and Davies struggled to keep up with the required rate and, when Willey bowled the former for 13, it looked an uphill struggle for the Brown Caps.

Davies was then brilliantly run out by Willey, who also caught Mahmood off Muhammed Azharullah, and the dangerous Glenn Maxwell (29) fell to Steven Crook (2-26).

Zander de Bruyn and skipper Vikram Solanki came and went without seriously troubling the scorers as the contest quickly petered out.

But Willey provided one memorable final flourish, having Zafar Ansari caught by Crook, Lewis taken by James Middlebrook and Chris Tremlett caught behind by a diving David Murphy to leave Northants celebrating their first piece of one-day silverware for 21 years.