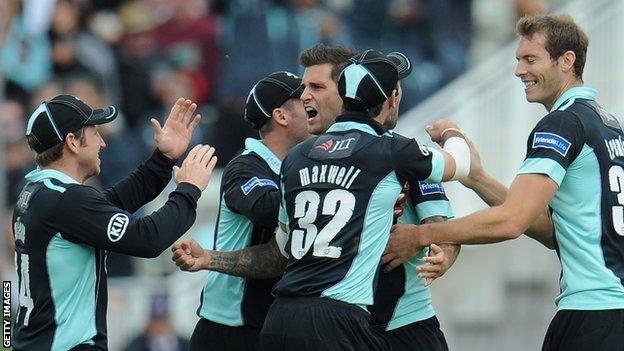 Surrey beat defending FLt20 champions Hampshire by four wickets to set up a final against Northants at Edgbaston.

Batting first, Hampshire lost Michael Carberry for six early on and struggled towards a below-par 142-9, Sean Ervine's 47 the only significant score.

They lost wickets at a steady rate, but Zander de Bruyn's patient 41 not out off 40 balls was key to their victory.

They now face Northants in Saturday night's final, the Steelbacks having beaten Essex in the day's earlier semi-final.

Surrey are looking to secure their second domestic Twenty20 title, having won the inaugural competition at Trent Bridge 10 years ago

Having earlier been put in by Surrey captain Vikram Solanki, Hampshire, who lost just once in the South Group on their way to finals day, got off to a slow start.

It took them 10 deliveries just to register a run and it was not long before the title favourites lost their star batsman Carberry, who had passed 500 Twenty20 runs for the season on his way to six, to Jon Lewis.

James Vince and Jimmy Adams set about rebuilding the innings but Jade Dernbach (2-32) produced a full, swinging delivery to bowl Vince with his first ball of the match, and then trapped Neil McKenzie in front five balls later.

Ervine's crucial 47, which included three sixes and two fours, kept Hampshire ticking along but he never had a partner who stayed with him for long, Adams' 19 off 20 deliveries the next best score.

Once the impressive Azhar Mahmood (2-9 from four overs) removed Ervine and Dimitri Mascarenhas, playing in his final Twenty20 match, in consecutive overs, the hosts were forced to scramble towards their lowest total batting first of the year.

Michael Carberry's six runs in the semi-final took him to 502 for this year's FLt20 - just 15 runs behind Somerset's Craig Kieswetter.

Surrey's reply got off to inauspicious start, losing both Roy and Davies early before Glenn Maxwell (26) and Vikram Solanki (19) shared 36 to settle their nerves.

Danny Briggs (1-28) trapped Solanki in front and Maxwell was caught by Ervine off the bowling of Liam Dawson (1-29) to check their progress again, but De Bruyn came in to anchor the run chase.

He hit just three boundaries in compiling a steady 41, but it was a vital innings and ensured Surrey's progress, despite the dismissals of Gary Wilson (15) and Azhar Mahmood, who was run out without facing, in the space of two deliveries.

Zafar Ansari (21 not out) hit the winning boundary to book Surrey a place in the final with four balls remaining.