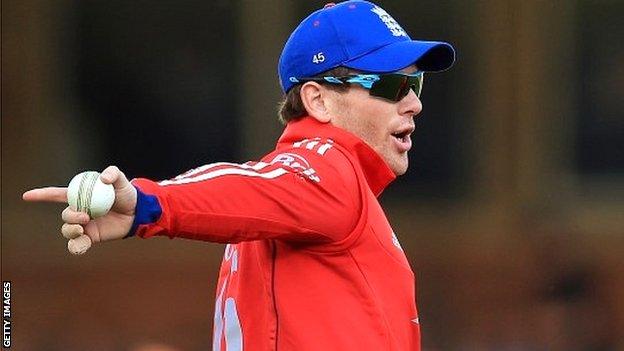 Middlesex batsman Eoin Morgan will captain England Lions against Australia in a two-day tour game at Northampton starting on Friday.

Northants were due to provide the opposition, but their qualification for Twenty20 Finals Day means the Lions will fulfil the fixture.

The team features a number of players who have represented England before at a senior level in different formats.

Lancashire spinner Simon Kerrigan is one of several youngsters in the side.

Left-armer Kerrigan, 24, took six wickets against Australia A in a four-day match at Old Trafford last year and has claimed 47 wickets in Division Two of the County Championship this season - the most by any spinner.

Also in the team is Ben Stokes, the promising 22-year-old Durham all-rounder who was sent home from the Lions's tour of Australia in February for disciplinary reasons.

Stokes, a combative left-handed batsman and right-arm pace bowler, played five one-day internationals for England in 2011 with a high score of 20 against India, and this season has 32 Championship wickets at an average of 24.94, plus 425 runs in 19 innings with three fifties and a top score of 61.

Left-hander Morgan, 26, remains a regular member of England's limited overs set-up but played the last of his 16 Tests in February 2012 and has not had an opportunity to improve on an average of 30.43.

In eight one-day internationals for England this summer, he has made 154 runs with a top score of 49 against New Zealand.

Joining him in the squad is former Durham seamer Liam Plunkett, who last played for England in February 2011 and made the last of his nine Test appearances in 2007. The 28-year-old has taken 28 wickets at a cost of 24.43 apiece for Yorkshire this year.

National selector Geoff Miller said: "Northamptonshire's progression to Finals Day has presented us with a great opportunity to field a strong Lions team to face the Australians at Wantage Road.

"We have looked to reward the players from the county circuit who have performed well this season and will look to push for places in future England squads with this fixture.

"For practical reasons we had to recognise that a number of players were unavailable but as is always the case with these fixtures, they are an excellent marker for judging the level of these players at a very high international standard and we look forward to seeing the team perform strongly against the Australian opposition."