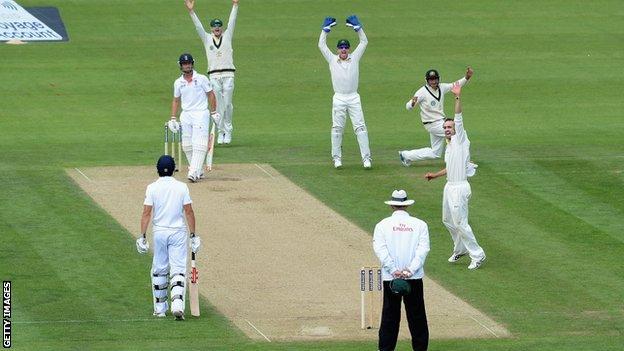 After their fightback in Manchester, the question was whether Australia could build on their improvement in the fourth Test at Chester-le-Street. The answer is an emphatic "yes".

With a workmanlike and disciplined bowling performance, the tourists nagged away at the flaws in England's batting line-up as they reduced the hosts to 238-9 on the first day at Chester-le-Street.

The Australia attack has a nice balance to it, with Peter Siddle charging in and Ryan Harris asking questions with every ball.

"England's batting against Nathan Lyon was pathetic. They were 107-1 and sitting pretty and they gifted wickets to a non-spinning off-spinner.

"He is an average bowler. He doesn't look as good as Jim Laker or even Graeme Swann, but he's got four wickets with spin - or non-spin as we might say."

Shane Watson keeps things incredibly tight and Jackson Bird bowled extremely well on his first Ashes appearance, keeping to the type of full length which is ideal for these types of pitches to suggest he could be a real force in county cricket.

But the real star turn was Nathan Lyon, who bounced back from a difficult time at Old Trafford to record figures of 4-42.

It is not every day that a spinner takes four wickets on the first day of a Test match, on a pitch offering very little assistance, but Lyon bowled a tight line into the wind all day and earned his rewards.

When Ian Bell did try to get after him, as he and Kevin Pietersen had done so successfully in Manchester, he got himself out, and from then on England became extremely cagey towards him.

Bell's dismissal was emblematic of a confused and erratic England batting display.

Opener Joe Root would be averaging 11 for the series if he had been caught for eight in the second innings at Lord's.

In that instance, Root went on to make 180, but the chance he edged between the wicketkeeper and slip was evidence of a weakness that Australia have preyed on ever since.

The Yorkshire youngster is hanging on the back foot far too much, allowing the Aussie seamers to pitch it up that little bit further and locate the edge of his bat.

When Root was promoted to opener for the series, people wondered whether the new ball would be a problem for him and you have to say that so far this series it has been.

Cook may have scored 51 but he looked badly out of touch and the longer he clung to the crease the worse it got.

The ball from Bird that dismissed him lbw nipped back into the England left-hander but the fact that Cook offered no shot was a clear sign of a man low on confidence.

Jonathan Trott has also been struggling for form but he went about things in a totally different manner, batting positively to score 49 off 60 balls before he was caught at short leg off Lyon.

Kevin Pietersen made a typically wild start to his innings before falling rather softly to a prod forward at Lyon, but it was Bell's reckless swipe to mid-off that really kick-started England's demise.

Australia captain Michael Clarke brought his fielders into the ring to starve England of runs and they just seemed to shrivel up in the face of the pressure.

Jonny Bairstow's painstaking 14 off 77 balls was a particularly difficult watch, suggesting he is getting affected by the scrutiny on his position.

All in all, it was a limp and listless performance from England, and once again it is the bowlers who will have to try to salvage the situation.