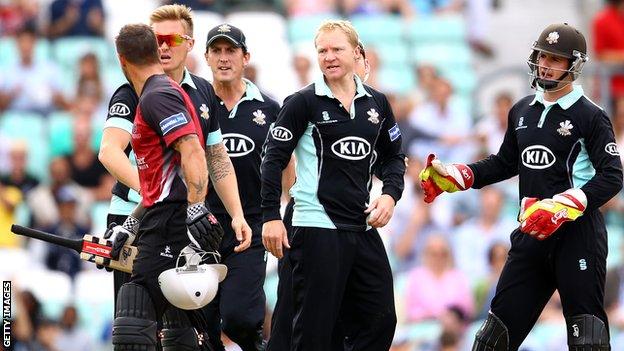 Batting first, Craig Kieswetter continued his good form with an unbeaten 70 as the visitors totalled 148-6 after 20 overs.

The hosts lost three late wickets but Jon Lewis hit the winning runs with six balls remaining to seal their place in the semi-finals.

The teams looked to be heading for a nervy final over before the former Gloucestershire man's four off Alfonso Thomas's last ball - Zander de Bruyn, Gary Wilson and Zafar Ansari all having fallen in the space of five deliveries previously.

Surrey had been in complete control until that point, with Vikram Solanki's 38 off 26 balls proving to be crucial after Jos Buttler's brilliant, diving catch in the deep ended Roy's charge off the bowling of Peter Trego (2-16).

Azhar Mahmood (14) and Wilson (19) provided important support through the middle overs, ensuring the late clatter of wickets was not more decisive.

Kieswetter had earlier been central in Somerset's effort with the bat once again, notching a fourth successive half century in Twenty20 cricket in reaching 70 not out, an innings which came off 51 balls and included four fours and three sixes.

Trego's eye-catching 33, which was ended by Gareth Batty (1-24) and sparked an ugly confrontation between batsman and bowler, and Nick Compton's 22 off 11 balls were also important as the visitors headed towards an imposing total.

But fine bowling by Mahmood (0-25) and Jade Dernbach (2-30) at the death limited the damage and Surrey's successful run chase takes them to finals day for the first time since 2006.