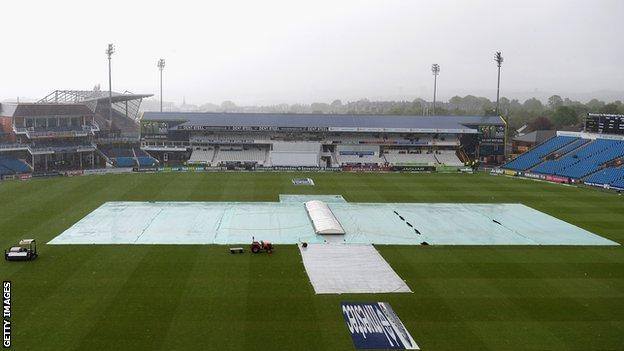 Yorkshire extended their lead at the top of the County Championship to 10 points after rain saw their game with Warwickshire abandoned as a draw.

After a delayed start at Headingley, the hosts resumed their second innings on 148-7 and added just 32 runs to be 180 all out, Chris Woakes taking 5-42.

Chasing 174 to win, Warwickshire could only manage two overs at the crease before bad weather set in.

They were 3-0 when the game was finally called off.

Yorkshire are now 10 points clear of second-placed Sussex having played a game less.

"The final day was hit by poor weather and just 70 minutes of play was possible.

"In that time Warwickshire grabbed three Yorkshire wickets for 32 runs and set up a victory target of 174 in 36 overs. Rain finally won the day with the visitors 3-0 in their second innings.

"Gale was full of praise for the opposition claiming they were excellent 2012 champions and had some fine players such as Chris Woakes who bagged eight wickets in the match.

"The draw did Yorkshire's hopes of the title no harm. They lead the first division by 10 points from Sussex who have played a game more."