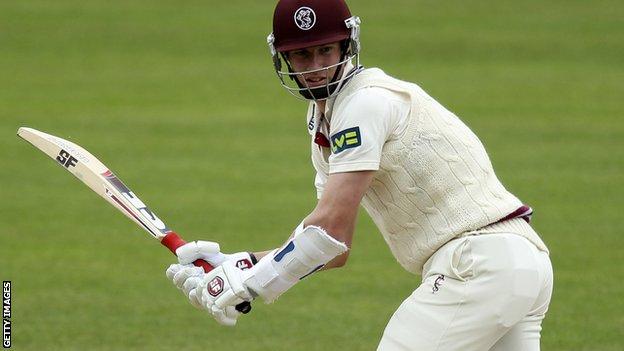 Starting at 70-1, the hosts fell to 81-6 with Andre Adams and Luke Fletcher taking two and three wickets apiece.

Jos Buttler was gone for 23 after a brief revival alongside Meschede.

The South Africa-born paceman was then ably supported to his half-century by George Dockrell (23), but succumbed to a yorker from Harry Gurney soon after before bad light meant an early close.

After day two was heavily disrupted by rain, Somerset were in deep trouble early as they set about building a total somewhere near Nottinghamshire's 378. Adams bowled Chris Jones for 37 and Somerset scored just eight runs in the next 10 overs, for the loss of a further four wickets.

Nick Compton (34) edged to slip before James Hildreth, Craig Kieswetter and Peter Trego fell for two, one and nought respectively.

Meschede then took a far more aggressive approach than his predecessors, smashing seven fours and two sixes until he was out just shy of his career best score of 61. Dockrell was gone soon after when James Taylor caught him off the bowling Samit Patel and stumps was called just six balls later.