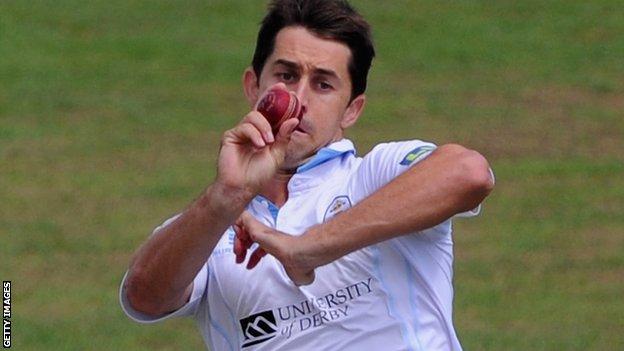 Tim Groenewald took 5-40 as Sussex were skittled for 133, leaving Derbyshire's batsmen 174 to win - a target they reached with nine wickets in hand.

It secured their first Championship win of the year and came after Sussex capitulated to 29-5, Luke Wright (49) provided the only real resistance.

He was Groenwald's fourth victim at 124-8 and the innings was soon over.

Derbyshire then won inside 43 overs, Ben Slater (66no) and Wayne Madsen (62no) making light work of the target.

Sussex endured a nightmare start to the day as Groenewald followed up his late dismissal of Chris Nash the evening prior by taking the outside edge of Luke Wells' bat with the third ball of the morning.

Michael Yardy was next to the crease and once he edged Mark Footitt behind it triggered a collapse that saw Lewis Hatchett trapped lbw by Groenewald and Rory Hamilton-Brown likewise by Footitt to make it 29-5.

Ed Joyce (17) and Ben Brown (23) at least provided minor contributions but when Groenewald sent Wright back to the hutch one short of his half-century, Sussex were soon all out - the South Africa born seamer completing his five-wicket haul, and with it the innings, by clean bowling Chris Jordan.

Eager to secure Derbyshire's first win in the County Championship this summer, Chesney Hughes (34) scored at just shy of a-run-a-ball before Jordan uprooted his off-stump.

Slater and captain Madsen continued on untroubled as the visitors took their first win in 11 attempts this year although they remain rooted to the bottom of Division One.