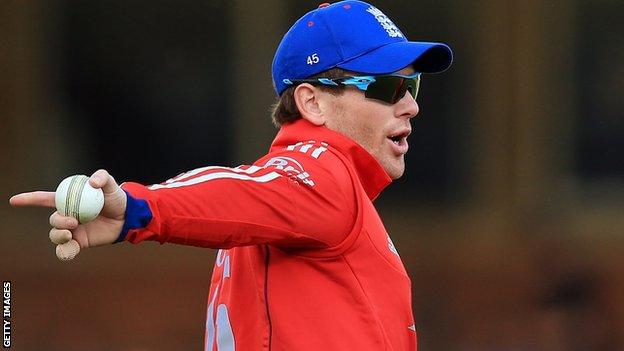 Eoin Morgan hit an unbeaten 39 as Middlesex completed an impressive County Championship victory over Durham in less than three days.

The hosts needed just 44 runs with eight wickets still intact at the start of the day but lost Adam Voges in the third over.

The win takes Middlesex above the visitors and up to third place.

"It was a game of fast-forward - you couldn't stop and enjoy a session really because there was no time to breathe.

"We bowled superbly well in both innings and it's very satisfying to build on an excellent performance against Sussex [in Middlesex's last Championship match].

"There was no real standout performance in what was an excellent team effort which shows what a good side we are and that we're moving in the right direction.

"This win puts us right up there in serious contention for the title but I'd say there are six sides still in it.

"I don't want to read too much into our remaining fixtures as every side is in this division on merit and can be dangerous on their day."

"It's only the batting that let us down in this match. The other disciplines were fantastic. Bowling-wise Graham Onions was outstanding and some of the spells from Chris Rushworth were superb.

"We did a lot of things right in this game but we couldn't find a way of getting enough runs on the board. It is disappointing because we usually get over the line on these kinds of wickets, wickets that do a bit extra with the ball nipping around. We are used to these wickets at the Riverside, but they put us under pressure and we couldn't get enough runs on the board.

"There is a large part of the season left yet and if we look after what we do when we are on the park we will pick up points. Losing this match does hurt, but it is not the end of the season."