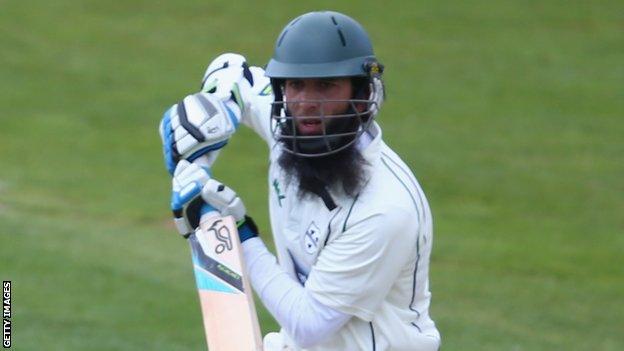 Moeen Ali became the fourth player to reach 1,000 first-class runs for the season but his Worcestershire side struggled against Kent.

The left-hander reached the landmark with a four through mid-wicket off Mark Davies to take him to 43.

His 59 and Oxford University student Tom Fell's 64 not out proved vital in keeping their side's innings together.

Kent captain James Tredwell was in devastating form, taking 4-34 leaving Worcestershire 111 behind on 213-7.

It was the England spinner who took the wicket of Moeen on his way to recording his best first-class bowling figures this season as Kent look on top going into day three.

However 19-year-old Fell, who was out without scoring in his only previous Championship innings, remains at the crease after a rain-affected day at New Road.

"The weather-truncated day will not have helped Kent's efforts to win this game, but once play did get going, so did Kent.

"Skipper James Tredwell took 4-34 including the important wicket of Moeen Ali who was looking dangerous.

"Worcestershire avoided the follow-on thanks to Tom Fell's highest first-class score and in so doing have made it harder for Kent to pick up a second Championship win."