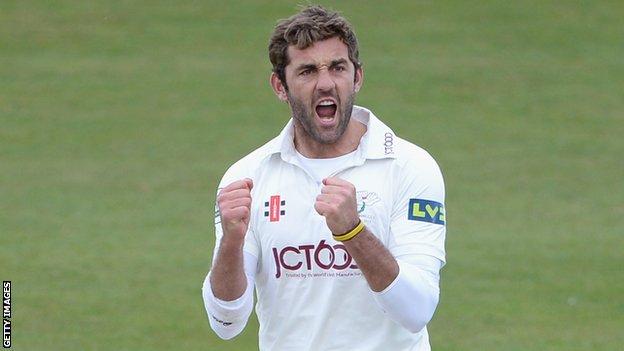 Yorkshire added only eight more runs to their overnight total, finishing on 302 with Jack Brooks the last man out.

In reply, three of Warwickshire's first five batsmen failed to get out of single figures as they fell to 50-4.

When Ambrose was caught in the slips off the bowling of Steven Patterson (2-38), the defending County Championship champions appeared to be heading towards a dismal total.

However Evans began to patiently re-build his side's innings with his 88 coming from 188 balls before a mis-timed shot off England bowler Plunkett was caught by Adam Lyth to leave the visitors 182-7.

And, after losing Ateeq Javid (17) late on, Warwickshire closed still trailing by 81 runs.

"Yorkshire ended the day with a clear advantage although not necessarily a decisive one. Their bowling was of a high standard throughout and they showed great discipline and energy.

"Liam Plunkett bowled at a challenging pace but all the seamers kept the pressure on, and Adil Rashid seemed to enjoy a long bowl, running through his variations.

"Laurie Evans, like Gary Ballance yesterday, showed that runs could be made with patience and good judgement. He was primarily responsible for making sure Warwickshire did not fold after a rocky start, but the lower order made stubborn contributions.

"The hard-fought nature of the cricket on the first two days of this match has done both teams great credit."