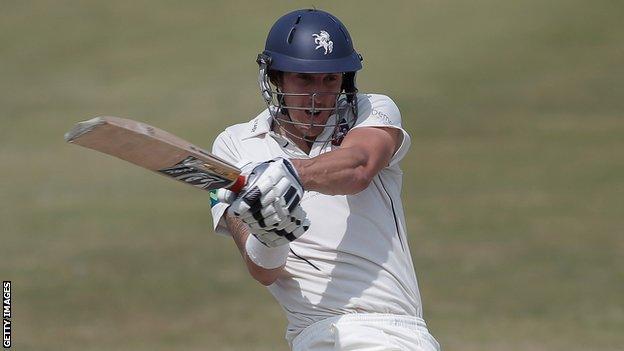 Kent had middle-order batsmen Ben Harmison and Darren Stevens to thank for their recovery on day one against Worcestershire at New Road.

The visitors were put into bat and were 25-4 at one stage, losing three wickets for no runs in a three-over spell.

But Harmison (96) and Stevens (95) put on 174 for the fifth wicket as Kent were eventually bowled out for 324 with one ball of the day remaining.

Seamer Gareth Andrew (3-81) was the pick of the Worcestershire attack.

Left-armer Jack Shantry (3-69) also struck three times and it looked as though the home side would race through the tail, but Calum Haggett (34 not out) and Mitchell Claydon (33) pushed Kent past 300 and earned them a third batting bonus point.

"Kent, through Stevens and Harmison, recovered from the brink. Both deserved centuries, but Stevens holed out to short mid-wicket and Harmison missed a full toss.

"Andrew bowled an excellent early spell, maybe his best of the season. Worcestershire's bowlers plugged away but a very green pitch seemed to have flattened out by the afternoon session, and both Haggett and Claydon picked up useful runs.

"A cracking day of cricket that had almost everything!

"A sensational start for Worcestershire, four Kent batsmen out before lunch for not a lot, a Kent fightback and two batsmen out just shy of their centuries.

"At 25-4, Kent might not have dared dream of amassing the total they did and now this match is back in the balance. Honours even."