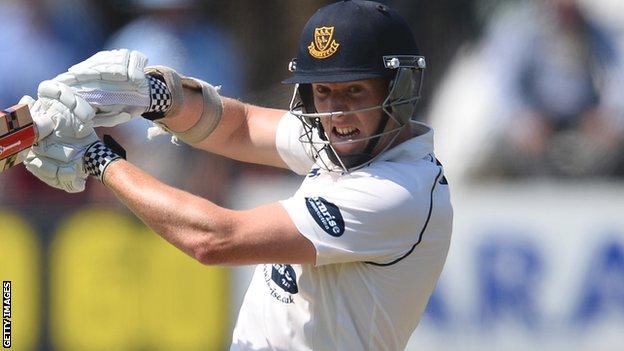 Luke Wells scored his second first-class century of the season as Sussex make 314 all out against Derbyshire.

Staffordshire-born debutant Alex Hughes (3-49) took three wickets, including two in three balls, as the hosts slipped from 144-3 to 189-6.

Chris Jordan made 48 and Steve Magoffin 32 but Tim Groenewald wrapped the Sussex innings up with 3-74.

"Honours about even after day one at Hove, although Sussex will be relieved to have secured three batting points having at one stage been 189-6.

"Having won the toss, Derbyshire made good use of the overcast early conditions and debutant Alex Hughes bowled well.

"Luke Wells's innings contained 16 fours and he batted with real determination and concentration whilst not playing at his best.

"Much will depend tomorrow [Saturday] on how the pitch plays and only then will we know whether this is a decent Sussex total."