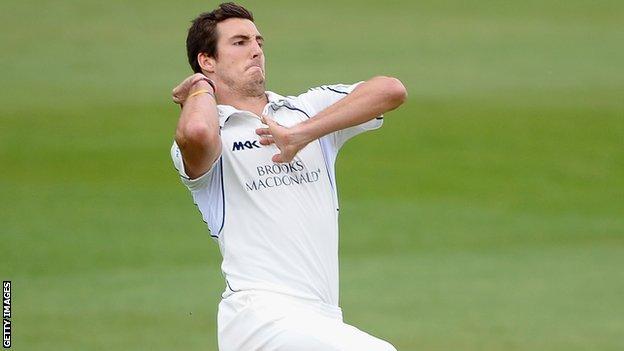 Steven Finn's four wickets helped skittle Durham for 143 before Middlesex closed on 126-5 at Lord's on day one.

Five overs in, Durham were 13-3 after their top three had all edged behind.

The middle-order showed some resistance before Finn dismissed Paul Collingwood for 30 and then polished off the tail.

In reply, England seamer Graham Onions struck twice to reduce Middlesex to 15-3 and, after a brief rally, Eoin Morgan and John Simpson (both 20) fell late as the hosts battled their way to stumps.

"Middlesex have just about kept control of the match thanks to a defiant knock from Neil Dexter, which has been ably supported by Simpson and Gareth Berg.

"Overall, it was a bowler's day and the toss was crucial as the hosts piled the pressure on under cloudy skies at Lord's.

"Tim Murtagh was the pick of the Middlesex bowlers but Finn, who was held back as first change, wrapped up the innings to finish with four wickets.

"Onions led the fightback from the visitors with a typically metronomic display that leaves the batsmen with little room for error.

"If Middlesex can win the morning session on day two, against a ball that is 46 overs old, then a more than useful first-innings advantage could be decisive in the match."

"On a day which has seen 15 wickets falling, it is Middlesex who have just shaded things. They bowled Durham out for 143 and closed the day on 126-5, but on a track which seemed to have lost a lot of its pace after the carnage of earlier in the day.

"After Finn's 4-46, Onions - the other forgotten England man - moved to 400 first-class wickets when he saw off Joe Denly for a duck."