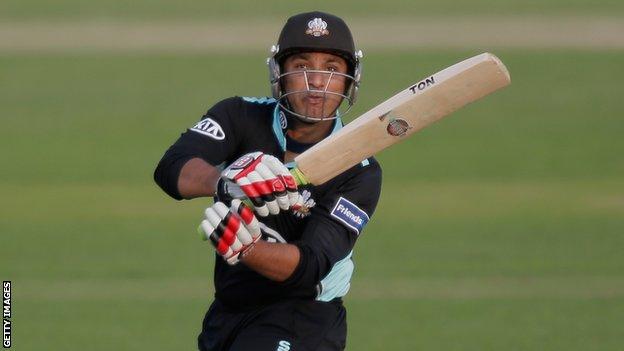 Surrey sealed their place in the FLt20 quarter-finals with a thrilling five-wicket win over Kent at The Oval.

Azhar Mahmood blasted 47 off 31 balls and Zafar Ansari made an unbeaten 30 as the home side recovered from 61-5 to chase down 140.

Fabian Cowdrey scored exactly 50, his first half-century in Twenty20 cricket, and Darren Stevens hit a quickfire 29 not out to help Kent to 139-4 .

In front of a packed Oval crowd Chris Tremlett removed Daniel Bell-Drummond in his second over before Cowdrey and Sam Billings (28) put on a partnership of 61.

Gareth Batty took two wickets as Kent slipped to 98-4 before Stevens and Ben Harmison (19 not out) smashed 41 off the last four overs.

Jason Roy (30) and Steven Davies (27) got Surrey off to a flying start before Stevens removed Davies and Vikram Solanki for a duck in his first over.

Adam Riley chipped in with two wickets as Surrey lost five wickets for 14 runs and looked to be heading for defeat, but Mahmood had other ideas and smashed three sixes and three fours in his innings.

The win means Surrey move up to 12 points in the South Group and are guaranteed at least one of the two third-placed spots.