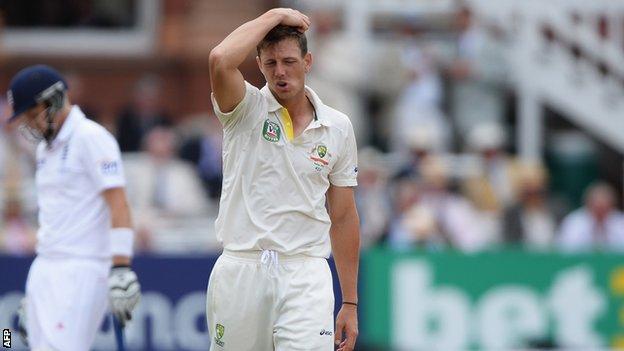 Australia fast bowler James Pattinson will miss the rest of the Ashes series against England after suffering a stress fracture of the lower back.

The 23-year-old complained of soreness in his hip and back at the end of the second Test at Lord's.

"Unfortunately he will not take any further part in this Test series," said Australia team doctor Peter Brukner.

The tourists say they have no immediate plans to call up a replacement, which could mean a recall for Mitchell Starc.

Starc was left out of the side which was thrashed by 347 runs on Sunday as England established a 2-0 series lead ahead of the third Test at Old Trafford starting on 1 August.

The right-arm paceman, who took 5-135 in the first Test at Trent Bridge, only recently returned to fitness after undergoing ankle surgery.

Pattinson took seven wickets in the first two Tests at a cost of 307 runs, and almost helped Australia pull off an unlikely Trent Bridge victory with a gritty 25 not out in a thrilling climax to the first Test.

But this is the latest setback in a career blighted by injuries, with the Victoria cricketer breaking down four times in 2012 alone.

Two other potential replacements, Jackson Bird and Pat Cummins, have endured serious back problems of their own in recent times.

Cummins, a highly-rated 20-year-old quick, took 4-43 for Australia A against Zimbabwe in Harare last week.

James Faulkner is also available as back-up to frontline seamers Peter Siddle and Ryan Harris, while Josh Hazlewood, Nathan Coulter-Nile and Chadd Sayers could be called up from the Australia A squad.

"Scans have identified an early stage low back stress fracture," Prukner said of Pattinson. "He will commence a rehabilitation programme with the aim to have him back for the Australian summer."

Cricket Australia general manager Pat Howard added: "While we are obviously disappointed for James, the selectors have five bowlers fit and ready to perform in England, providing them with many options.

"It is also important to note that several players have been performing for Australia A and are available to be called up at any stage if the national selection panel requires them."