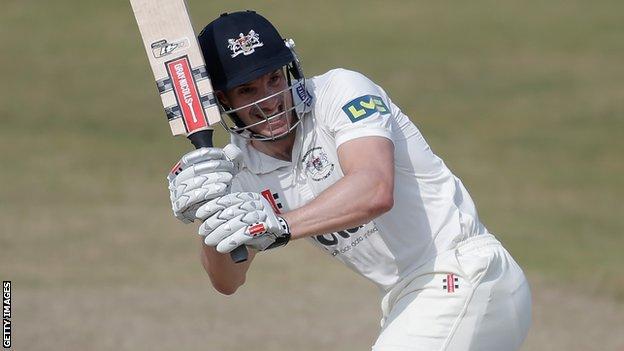 Skipper Michael Klinger just missed out on his fifth century of the summer as Gloucestershire beat Worcestershire by six wickets at Cheltenham.

The victory saw the home side move above Worcestershire and Hampshire into fourth place in the Division Two table.

Joe Leach was finally out for 114 as the visitors were dismissed for 337, with Tom Smith taking 4-91.

Set 194 to win, Klinger made 92 before being bowled by Graeme Cessford, but his side soon reached 195-4.

Gloucestershire were only seven runs short of their target when Klinger, whose form with the bat has been in marked contrast to that of his fellow Australians in the Lord's Test on Friday, was out - but Benny Howell hit the winning boundary at the start of former RAF corporal Cessford's next over.

The win was Gloucestershire's first in a Championship game against their neighbours at the Cheltenham festival since 1980.

Worcestershire only managed to add 41 to their overnight 296-8 at the start of play, with 22-year-old Leach caught by Miles Hammond off Smith after hitting 14 fours in his four-and-a quarter-hour innings.

And there were to be no major alarms for Gloucestershire on the way to their target after Klinger and Chris Dent (45) had launched their run chase with an opening stand of 95.

"A well-earned win for Gloucestershire, who had Worcestershire on the back foot from the moment they established a big first innings lead.

"Worcestershire would have wanted to defend 250-plus on the final day but 194 never looked enough once Dent and Klinger both got starts.

"Klinger batted positively and deserved a century only to miss out on 92 with Gloucestershire needing eight to win."