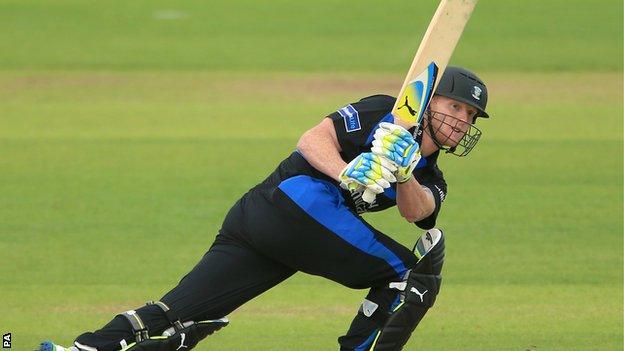 Ben Stokes's 72 not out helped Durham to an exhilarating final-ball three-wicket win over Nottinghamshire.

The hosts had Durham reeling at 44-4 in the ninth over, but Stokes began to swing his bat to leave them needing eight off the last over for victory.

And a single from Michael Richardson from the last ball of the game saw them home on 160-7.

Despite the defeat, Nottinghamshire still lie second in the North Group table, while a win moves Durham up into fourth.

"It was a brilliant performance. The way we bowled, after the got off to a flying start, was testament to the way we've gone about Twenty20 this year.

"They got ahead but we pulled it back nicely to restrict them to a pretty decent score.

"On the batting side, we didn't get off to the best start but Breese was there in the end and got 30-odd off 14 balls.

"He's done things like that throughout his whole career at Durham and he's a great man to have in so low down the order."