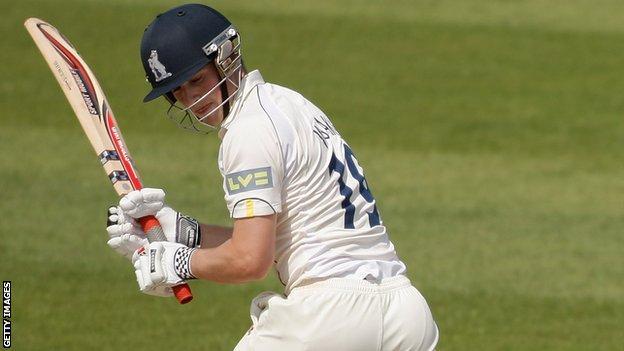 Chris Woakes hit a rapid 60 to enable Warwickshire to set Nottinghamshire a huge victory target of 427.

The England all-rounder hit his runs from 87 balls after his team's bowling had pegged back the visitors, who reached 38-0 in their second innings.

Notts resumed on 131-2 but Keith Barker and Jeetan Patel each picked up three wickets as they were all out for 217.

Warwickshire then batted aggressively to reach 180-6 from 44 overs before declaring with Rikki Clarke 54 not out.

He shared a sixth wicket stand of 104 with Woakes, who was out three balls before captain Varun Chopra called a halt to the innings.

Nottinghamshire had started day three with Michael Lumb and James Taylor both on unbeaten half-centuries in a third wicket partnership of 84.

Lumb (51) fell to Patel in the second over of the day and although Taylor went on to make 80, the final seven batsmen could only manage 54 runs between them.

Patel finished with 4-60 and Barker took 3-44, with his wickets coming in a 16-ball spell in which he did not concede a run.

He was also involved some controversy, appearing to make distracting hand gestures as he ran in to bowl to Ajmal Shahzad, who backed away on two occasions.

An ugly-looking stand-off ensued before the umpires intervened, with the two players eventually shaking hands.

Patel and Clarke put their feet up as their batsmen seemingly put the game beyond Notts, who will need to bat all day on Thursday to salvage a draw.

"This match has produced enough surprises to suggest all results are still possible. Warwickshire will be hopeful that Jeetan Patel can extract enough turn from the final day pitch to bowl Notts out for a second time and complete back-to-back Championship wins.

"But the Notts middle order looks very strong and if any batting line up can threaten to set a record for the highest fourth innings-score conceded by Warwickshire to lose a game, it is theirs.

"It should be a competitive final day, although cordial relations between the two teams appears to have been re-established after a heated on-field row."

"An extraordinary and unexpected day ended with Nottinghamshire eyeing up the prospects of the second-largest successful run chase in their history.

"In reality, they will need to bat well on a pitch giving increasing assistance to both seam and spin.

"The umpires did well to quickly put a lid on the Barker antics - but by then he had claimed three wickets."