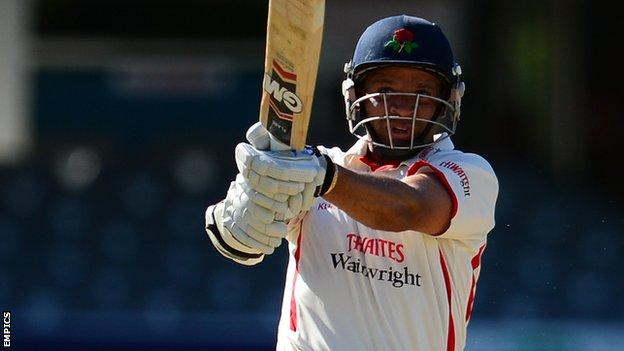 Veterans Ashwell Prince and Simon Katich both struck centuries as Lancashire's match with Glamorgan at Old Trafford headed towards a draw.

Katich passed 50 for the seventh time in 13 first-class innings this season and the 37-year-old is now just 126 short of the milestone of 1,000 Championship runs.

However, it will be Prince's hundred - his first in the four-day format in 2013 - that will give Lancashire the most satisfaction at the end of a day that started in terrible fashion for the home team.

But the Welsh side were unable to continue the momentum as South African Prince and Australian Katich, Lancashire's two most experienced top-order batsmen, combined to avert a collapse.

Prince reached his hundred from 123 balls and had hit 14 fours and two sixes by the time Nathan McCullum had him caught behind.

Ably supported by Luke Procter (53no), Katich pressed on to a third Championship century of the season, and although he fell to Wagg before the close, his efforts helped to ensure a draw will the most likely outcome on the final day.

"A first century of the summer for Ashwell Prince and a second in as many games for Simon Katich were the highlights of day three.

"Katich batted for over four hours on the hottest day of the year, while Prince hit 113 from 132 balls on a pitch that appears to be tough to score runs on.

"Only occasionally has the wicket offered any assistance for the bowlers late in the day.

"Nathan McCullum got a couple to turn and bounce, which will be of great interest to Simon Kerrigan if Lancashire are to stand any chance of trying to force a dramatic result akin to the reverse fixture at Colywn Bay earlier this season."