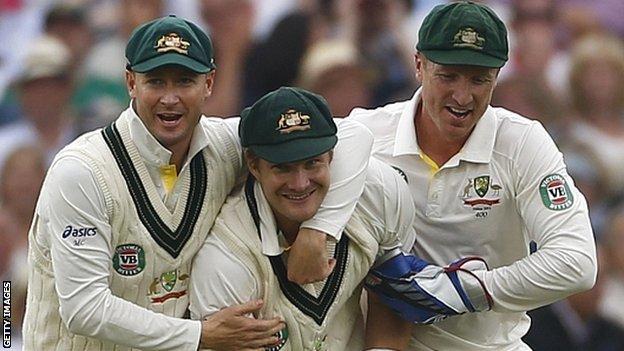 Australia wicketkeeper Brad Haddin has denied media reports there is a rift in the tourists' camp before the second Ashes Test, starting on Thursday.

The report went on to claim that captain Michael Clarke and all-rounder Shane Watson are at loggerheads.

"The Australian dressing room is fine, there is no feud," said Haddin.

"The group has been fine since day one of the tour. It [losing the first Test] hasn't driven us closer together, it has made us determined to win a Test."

Clarke refused to discuss the allegations on Tuesday, except to say that his team "are very focused on what is in front of us".

South African Arthur, 45, was sacked before the Ashes and is seeking £2.4m compensation from Cricket Australia or reinstatement as national coach.

He was replaced by Darren Lehmann, despite being contracted until June 2015.

Cricket Australia said at the time of his sacking that Arthur is "a good man" but performances have "not been at the standard we expect or desire".

Watson was one of four players internally suspended for the third Test on the tour of India after Arthur and Clarke questioned their attitude while opener David Warner was banned for punching England's Joe Root in a Birmingham bar during the Champions Trophy.

"But Cricket Australia is confident in its position on this matter. And I'm sure it'll get resolved in the appropriate fashion."

Australia lost an exciting first Ashes Test against England by 14 runs. The second of five Tests this summer takes place at Lord's.