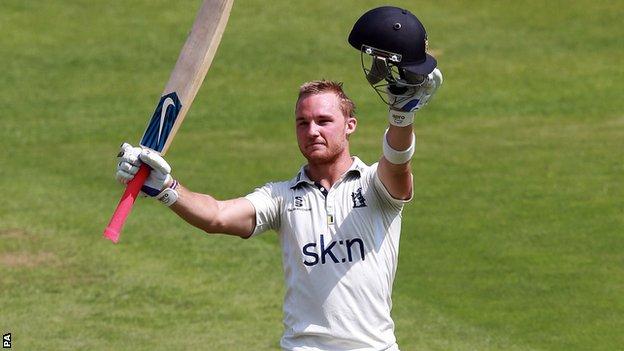 Warwickshire batsman Laurie Evans made 178, the highest score of his career, to put Notts on the back foot on day two of their game at Edgbaston.

The 25-year-old shared a seventh-wicket stand of 199 with Ateeq Javid (83) as Warwickshire totalled 463.

The visitors made a terrible start to their reply with Steven Mullaney lbw to the opening delivery from Chris Woakes.

Alex Hales followed for 17, but Michael Lumb and James Taylor hit unbeaten half centuries as Notts closed on 131-2.

After restricting Warwickshire with some tight bowling on the opening day, Notts endured a frustrating morning as Evans and Javid added 129 runs to the overnight score of 254-6.

They were eventually separated after lunch when left-arm spinner Samit Patel (3-123) bowled Evans to end a seven-hour innings that included three sixes and 22 fours.

Javid's hopes of a maiden century were dashed when he was caught behind off Ajmal Shahzad and Luke Fletcher polished off the tail for figures of 3-57.

Despite the double blow of losing Mullaney and Hales, the latter leg-before to off-spinner Jeetan Patel, Lumb (50no) and Taylor (54no) batted sensibly to add 84 before stumps - although Taylor greeted the introduction of Boyd Rankin with three successive boundaries as the paceman conceded 29 from four overs.

"Warwickshire's way isn't everybody's cup of tea but they won a championship last year based on huge first innings scores and then backed their bowlers to take 20 wickets.

"On this surface they may have their work cut out and with James Taylor and Michael Lumb both beginning the third day with unbeaten fifties.

"It could be time for Nottinghamshire's batsmen to make the most of the benign, friendly conditions."