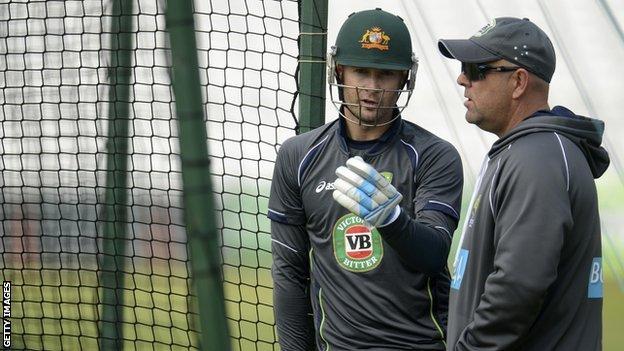 Coach Darren Lehmann has called on Australia's top-order batsmen to score more runs in the Ashes against England.

The tourists lost the first Test by 14 runs, with their top order struggling for runs and being rescued by major contributions from the tail.

The second Test against England starts on Thursday at Lord's and Lehmann said: "Our tail has done really well over a period of time now.

"But it's time for the batters to make sure they're making the runs."

Australia were 117-9 in their first innings before debutant Ashton Agar made 98 - the highest Test score by a number 11 - to help them to a total of 280.

They struggled again in their second innings and were 164-6 before a resolute 71 from wicketkeeper Brad Haddin got them within touching distance of the 311 needed to win the Test, before finally being bowled out 15 runs short of their target.

"I think we only batted for 64 overs in the first innings and 110 in the second," added Lehmann.

"We've got to be reversing that about, batting for 120 overs-plus in the first innings of a game and making our runs there."

Ed Cowan's place appears to be in most jeopardy after he was out for a golden duck and 14 batting at number three at Trent Bridge.

"He's had a tough game," said Lehmann. "Like everyone, you've got to make runs and perform.

"We're trying to learn and get better. I'm sure he'll get better at that as well."

Lehmann replaced Mickey Arthur as Australia coach 16 days before the start of the Ashes and the narrow margin of the result in Nottingham has given him hope for the future prospects of his side.

"I think they're quite close - a lot closer than people give them credit for, both sides. So the key for us is to make sure we're playing better," said Lehmann.

"I still don't think we performed to the level we want to perform at. If we do that then we'll be good enough."