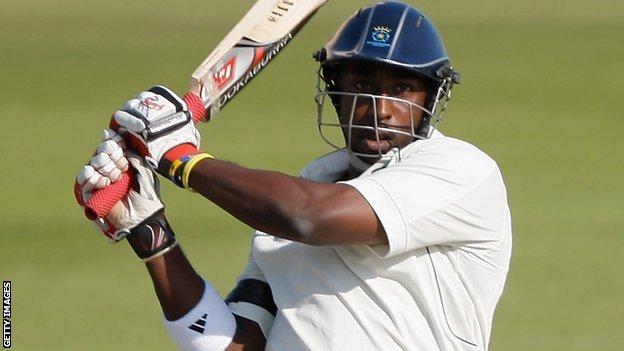 Carberry ended the opening day on 137 not out as the visitors reached 263-3.

More than half of Hampshire's total came from a third-wicket stand of 146 between the opener and Liam Dawson, who was lbw to Darren Stevens for 75.

Sean Ervine contributed 24 to an unbroken fourth-wicket stand of 71 with Carberry before the close.

The hundred, which included two consecutive sixes, was Carberry's first since September 2011 and came against a side he had previously played for, during a three-year spell at the St Lawrence ground.

"There was no hesitation for captain Jimmy Adams to bat first on a slow but solid wicket and Hampshire have taken full advantage.

"Michael Carberry's first century since September 2011 was a work of craft and very occasional explosion, but offered little or no chance to a toiling Kent attack.

"Credit too to the home attack, the frontline bowlers gave little away, Calum Haggett probably the pick of them.

"They'll need all the energy they can muster and some luck too to keep Hampshire from racking up a big total."