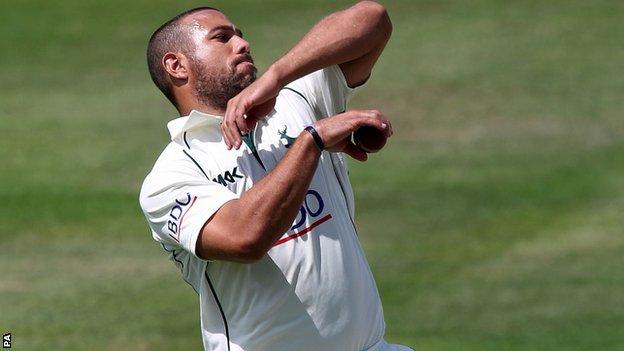 Tight bowling by the Notts attack kept Warwickshire in check on an attritional opening day to their Championship Division One game at Edgbaston.

It could have been worse for the Bears, but for the adhesive qualities of Ian Westwood and Laurie Evans.

Opener Westwood made 68 before falling to spinner Samit Patel (2-40) and Evans was 85 not out at the close.

A tight contest was on the cards beforehand with the two sides occupying fifth and sixth places in the Division One table and having identical records - Notts in fifth by virtue of having eight more bonus points.

They struck an early blow when Varun Chopra was caught at slip off Luke Fletcher, and also picked up the wicket of Will Porterfield before lunch, the Ireland batsman bowled by Adams offering no stroke during an opening spell of 1-7 from eight overs by the New Zealander.

Westwood and Evans added 89 for the third wicket before the former, who was dropped twice off Ajmal Shahzad, gave a catch to Adams at mid-on off Patel.

Warwickshire then lost three wickets in quick succession, slumping from 193-3 to 213-6, but Evans was unmoved and by stumps had faced 228 balls in a four-and-a-quarter-hour innings, which has brought him his highest Championship score since joining the club from Surrey in 2010.