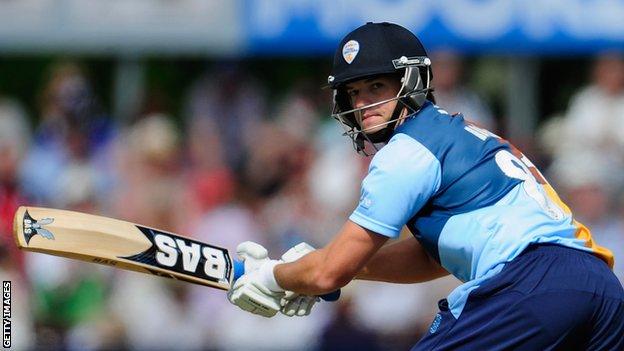 Morkel, needing 32 from the final over, hit two sixes and three fours - alongside a wide - meaning he needed six on the last ball to tie, but Liam Plunkett's yorker produced no runs.

Morkel earlier got his best T20 bowling figures of 4-25 as Yorkshire ended on 142-9, Dan Hodgson top scoring with 31.

And despite the South African's 51 from 31 balls, Yorkshire prevailed.

Derbyshire suffered an early setback in their reply as opening batsman Wes Durston slipped while running for a single and was forced to retire hurt.

They recovered and needed 35 from the final two overs to win, but only made three from former England international Ryan Sidebottom's excellent over under pressure before Plunkett's thrilling finale.

Victory for last year's beaten finalists - who were without head coach Jason Gillespie on compassionate grounds - is only their second in the competition this campaign and moves them up to fourth in the North Group.