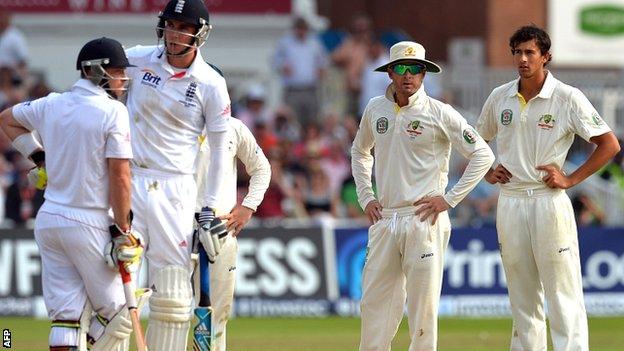 Ian Bell and Stuart Broad helped England build a potentially decisive lead of 261 over Australia in the first Ashes Test but the day was scarred by another major controversy.

"There is nothing within the laws of cricket that says Broad had to depart. But when he chose not to, it became an issue for the spirit of the game."

But in a hugely contentious moment, Broad was given an astonishing reprieve when umpire Aleem Dar failed to spot a thick edge to Michael Clarke at slip off the bowling of Ashton Agar.

Australia had already used up their two reviews and despite the big screen replays showing clear contact with his bat, Broad declined to walk.

The incident, which left Clarke and his team-mates fuming and coach Darren Lehmann shaking his head in disbelief on the team balcony, came one day after England batsman Jonathan Trott was given out lbw by the third umpire despite Hot Spot technology being unavailable.

England were so perplexed by Trott's dismissal that they raised the matter with the International Cricket Council and Australia are likely to be similarly aggrieved by Dar's aberration and Broad's decision not to give himself out.

The tourists' frustration was compounded by the sense that the game was already slipping away from them, given that England's lead was already 232. The highest successful fourth innings run chase at Trent Bridge is England's 284-6 against New Zealand in 2004.

On a slow, turning pitch that could benefit off-spinner Graeme Swann, England will be confident of going 1-0 up in the series.

But nothing can be taken for granted, given the absence of seam movement and the unpredictable nature of Australia's young batting line-up, who can take inspiration from debutant Agar's record-breaking 98 at number 11 on Thursday.

If Agar was Thursday's standout performer, then Friday belong to Bell, who has only made one century in his past 35 Test innings and has been averaging in the low 30s since his golden year of 2011, when he scored 950 runs at 118.75.

Barring the occasional late cut, his staccato innings offered little for the purists, but in the context of a low-scoring game it was among the most important he has played for his country.

On 34, he was given out lbw by umpire Kumar Dharmasena during a miserly spell by Shane Watson but the decision was overturned on review when Hawkeye showed the ball was missing leg stump.

Before this Test, Ian Bell's 89th, his average against Australia was 32.36 with one century, the 115 he made in his most recent match in January 2011 at Sydney.

He is the 14th player to pass 6,000 Test runs for England and, at 31 years and 92 days, the fifth youngest, behind Alastair Cook, David Gower, Michael Atherton and Kevin Pietersen.

When he reached fifty, he passed 6,000 Test runs, on 73 he brought up his highest score against Australia in England, and by the close he was within sight of a memorable hundred.

After two scarcely believable days of Test cricket, punctuated by catastrophic collapses and a dream debut, Friday's play was much less frenzied.

It nevertheless remained utterly compelling as the fortunes of both teams fluctuated before England made their move in the final session.

The hosts had resumed on 80-2 with their two most experienced batsmen, Alastair Cook and Kevin Pietersen, looking to capitalise on promising starts.

Having played with uncharacteristic restraint on Thursday evening, Pietersen was aggressive from the off, driving at anything overpitched by Mitchell Starc and reaching fifty with his fourth boundary in the first half-hour of play.

His partnership with Cook, which began after Joe Root and Trott had been dismissed off successive balls on Thursday evening, had reached 110 when two quick wickets put Australia back in the driving seat.

Pietersen was bowled for 64 when he diverted a length ball from James Pattinson onto his middle stump and Agar's amazing debut continued when he made Cook his first Test victim with a turning ball that caught the edge of the England captain's bat and flew to slip, where Clarke took a fine high catch.

"I certainly won't be crying for Australia. It shouldn't override the fact that Ian Bell has played one of his best ever innings for England. I still think it's a good pitch to bat on, so I'm not sure England will definitely win it."

Listen to the TMS Podcast

Agar struck again after lunch as Jonny Bairstow was caught behind for 15 to leave the hosts teetering on 174-5, a lead of just 109 runs.

The second new ball was a welcome sight to Matt Prior, who cut and pulled six boundaries in a counter-attacking cameo of 31.

But in keeping with much of the day, just when England were gaining the ascendancy they lost another wicket, Prior pulling Peter Siddle to midwicket.

Led by Bell, however, England gradually took the sting out of Australia's bowling and with Broad riding his luck to score quickly at the other end, a partnership of substance developed.

By stumps, Broad was within sight of his first half-century in 13 Tests and well on the way to restoring his reputation as a batsman.

His reputation in the eyes of the Australian players, meanwhile, may have taken a downward turn.