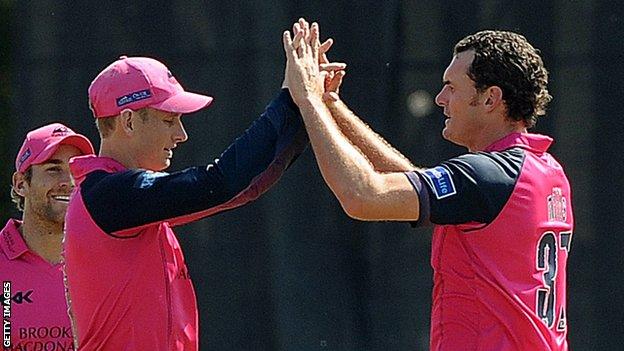 Essex were skittled for 74, their lowest score in Twenty20 cricket, as Middlesex thumped them by eight wickets.

New Zealander Kyle Mills removed Greg Smith and Graham Napier in the first over as he took 3-4.

Only Owais Shah (39) provided any resistance as the Eagles were bowled out in the 17th over.

Earlier this season, Essex also slipped to their worst-ever score in first-class cricket, managing just 20 all out in a County Championship Division Two match against Lancashire.

Joe Denly (34 not out) and Adam Voges (22 not out) then eased their side home with more than 10 overs to spare.

After choosing to bat first, Essex got off to the worst possible start as Smith and the dangerous Napier were both dismissed for nought to leave the hosts on 0-2.

Shah hit a flurry of fours before being stumped as only he and Tim Phillips made double figures.

Australian Shaun Tait took two wickets in the Middlesex reply but the damage had already been done as the Panthers moved to the top of the South Group table.