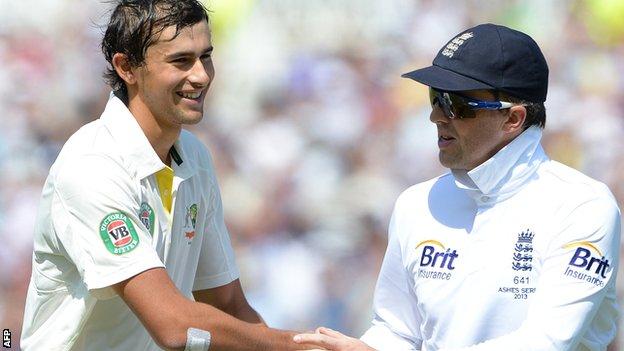 Australian teenager Ashton Agar broke the record for the highest score by a Test number 11 in the first Ashes Test against England at Trent Bridge.

The debutant left-arm spinner was out for 98, beating the previous top score of 95 made by West Indies' Tino Best against England at Edgbaston in 2012.

Agar and Phil Hughes (81 not out) also surpassed the record Test partnership of 151 for the 10th wicket.

Australia were finally dismissed for 280, a first-innings lead of 65.

"When I walked to the crease I was thinking we were in a little bit of trouble but the wicket was good," Agar told BBC Sport.

"Phil Hughes told me to take it ball by ball. We just played the moment and forgot about everything else. It was good fun, exciting and I enjoyed it.

"I have always tried to play freely and naturally and I don't really get too nervous. There are a lot of people who would love to be doing what I'm doing."

En route to the record, Agar had already beaten the previous best Test score by a debutant number 11 - 45 not out by Warwick Armstrong, for Australia against England at Melbourne in 1902.

The 19-year-old joined Hughes at the wicket with the score on 117-9 and the pair added 163 before Agar was last man out, caught by Graeme Swann on the mid-wicket boundary off the bowling of Stuart Broad.

The previous 10th-wicket record of 151 was set by New Zealand's Brian Hastings and Richard Collinge against Pakistan at Auckland in 1973, and equalled in 1997 by Pakistan's Azhar Mahmood and Mushtaq Ahmed against South Africa in Rawalpindi.

Agar was given a brief scare when he had only made six runs, Swann being denied a stumping by the smallest of margins when the replays were checked by the third umpire.

"What a stunning, gutsy, agonising 98 from Ashton Agar in the Ashes Test. Full marks to Hughes. Well done guys," Rudd wrote on Twitter.

Agar becomes the ninth player in Test history to finish as the highest scorer in an innings when batting at number 11, and only the second to do so on his debut following Jayantha Amerasinghe's 34 not out from a Sri Lanka first-innings total of 215 against New Zealand in Kandy in 1984.

"It was a remarkable innings. I remember my first innings at number 11 for Australia - I lasted one ball. At the start of this match I thought I was presenting a first cap to a bowler - not a batting all-rounder! He looked at ease and played proper shots, not slogs or swipes across the line. I don't think nerves play a part in Ashton's life at all."

Day two as it happened

He was watched by proud parents John and Sonia, and younger brothers Wesley and William as he made history at Trent Bridge.

Sonia said: "It doesn't take much for me to cry, but that was amazing. I kept saying, 'That's my boy out there, that's my boy!'"

"Whether he got 100 or not, it doesn't matter," said John. "I'm most proud he got out playing his shots. He didn't hold back. That's great.

"I'm going to enjoy it. I'm used to him doing pretty well. He has good days and bad days and it's a case of let the bad days go and hold on to the good ones."

Agar was one of six young Australian cricketers who arrived in England in April as part of an agreement between Cricket Australia and Hampshire.

He was allocated a club side and played for Henley in the Home Counties Premier Cricket League Division One in the early part of the season, but although he created a good impression, his figures with bat and ball did not suggest he would become an Ashes star.

In his debut for Henley, a pre-season friendly against Aston Rowant, he scored 54 runs, and took 2-30 with the ball.

In his two other appearances, he did not bat but took 1-19 against Welwyn Garden City, and grabbed a hat-trick against North Mymms in figures of 4-36.

"We could tell straight away that he had something about him, a quiet confidence, but, to be honest, he didn't really stand out with us. Our league is a high level with a lot of minor counties players and some good professionals."

On his Trent Bridge innings, Roberts added: "I am staggered and delighted. I was surprised he went out as a number 11 because I thought he was at least better than (James) Pattinson and (Mitchell) Starc, but it's still hard to believe he played so well."