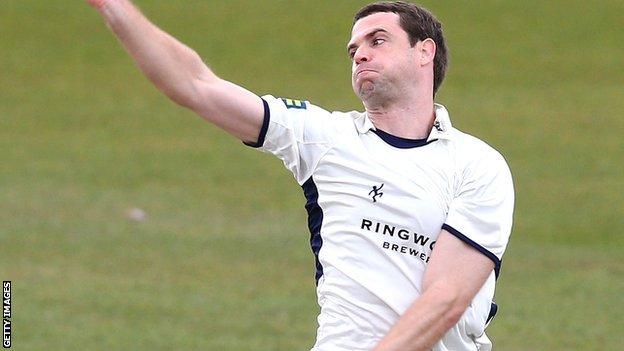 The visitors only added five to their overnight total as they were dismissed for 179, with Marcus North getting rid of Danny Briggs to finish with 5-30.

Glamorgan, chasing 221 to win, slumped to 58-5 with Tomlinson taking the first four wickets to fall.

Murray Goodwin (56no) and Mark Wallace (44) gave the hosts hope, but the last three wickets fell in nine balls as Glamorgan slumped to 177 all out.

The hosts had set up a chance of victory with a when they were still trailing by 41 runs.

After quickly taking the one wicket they needed on the final morning, they set about chasing down their target, but lost five wickets inside the first 17 overs, until Goodwin and Wallace gave them hope.

The pair put on 80 for the sixth wicket in 38.2 overs, but the dismissal of Wallace leg before to Tomlinson sparked a terminal collapse.

The last five wickets fell for 49 runs as Hampshire wrapped up their second victory of the season.

"It might only be Hampshire's second win of the season, but it gives them a chance - if only a small one - of making some ground up on the top two sides.

"James Tomlinson's four-wicket blast at the top of the Glamorgan second innings seemed to have put the game beyond the reach of the home side.

"But they battled hard in the middle order and made Hampshire work for their victory.

"Mckenzie and Tanvir's 101-run seventh-wicket stand on Wednesday evening with Hampshire at 53 for 6 in their second innings was a big turning point in the game."